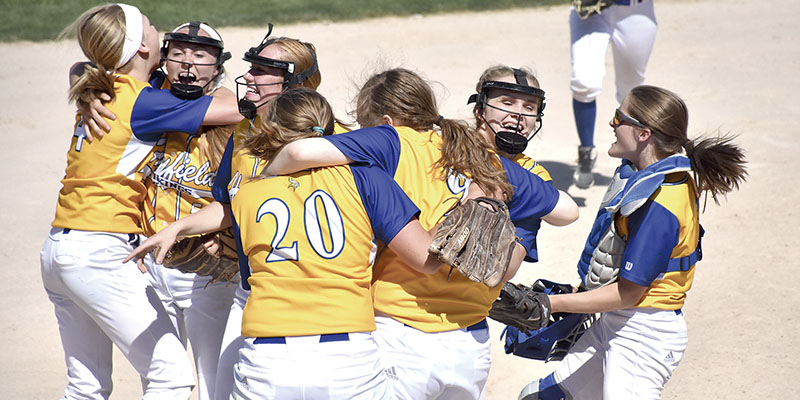 The Hayfield softball team celebrates its victory over Kimball at the Minnesota Class A softball tournament in North Mankato Thursday. Rocky Hulne/sports@austindailyherald.com

NORTH MANKATO — The Hayfield softball team finally shook of the ghosts of state tournaments past and picked up a win in dramatic fashion in the Minnesota Class A State Softball Tournament quarterfinals in Caswell Park Thursday.

After dropping their last four games at the state tournament over the past two years, Hayfield bounced back from a six-run hole to beat Kimball 13-12. 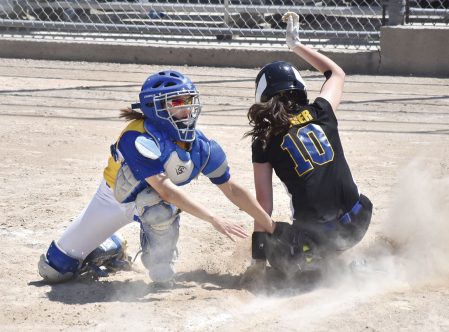 The Vikings had trailed 11-5 after three innings, but Hayfield pitcher Cailtyn Hendrickson allowed just one run over the last four innings to give the Vikings a chance. Hayfield tied the game in the sixth when Carrie Rutledge scored on a two-out wild pitch in the sixth inning and Olivia Matti hammered home the go-ahead runs when she drove a single down the right field line to make it 13-11 Hayfield.

“I knew anything close I had to swing on. She gave me an outside pitch and I went with it,” Matti, was four-for-four with three RBIs, said. “I really like playing these kind of games, where they’re intense. Our main focus was to stay calm and hit our way back into it.”

Hayfield’s Kyal Heydt zeroes in on an over-the-shoulder catch against Kimball in the quarterfinals of the Minnesota Class A State Softball Tournament Thursday in Mankato. Rocky Hulne/sports@austindailyherald.com

The game saw a total of 26 hits and 25 runs scores, but the Vikings were able to seal the game with their defense. The Cubs had runners on first and second with no outs in the bottom of the seventh inning,but Kyal Heydt made a diving catch at second base to save a run and Maggie Streightiff caught a fly ball in left field to preserve the win.

Rutledge said the Vikings never lost their positive attitude throughout the game.

“From the dugout we just kept saying to stay aggressive and we can hit off her,” Rutledge said. “It got us to where we are now and I’m so happy with my team. We all lean on each other.” 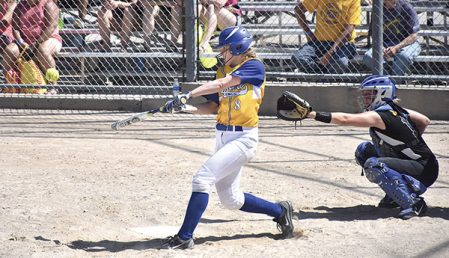 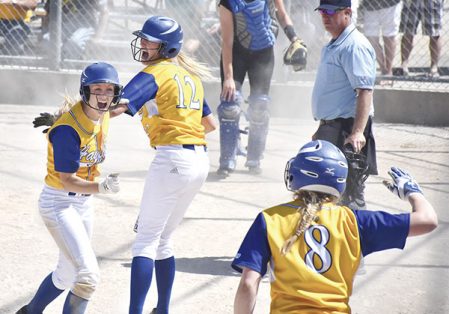