A near miss; Hayfield Vikings nearly upset No. 1 Edgerton/Southwest Christian in semis 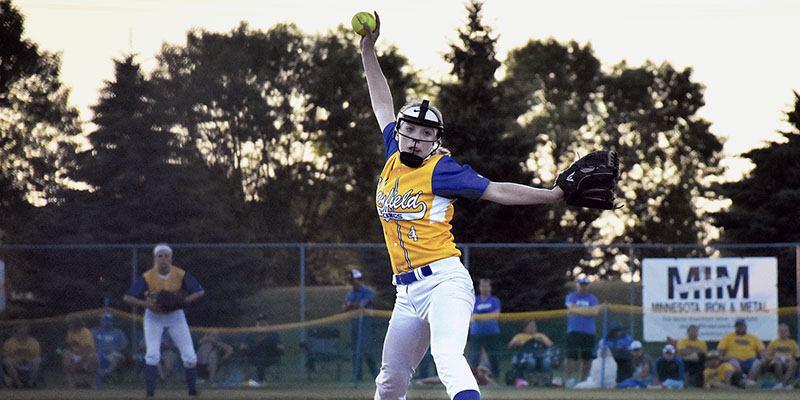 NORTH MANKATO – The Hayfield softball team put together one of their best innings of the season, but it wasn’t quite enough as they lost to Edgerton/Southwest Christian 10-9 in the Minnesota Class A semifinals in Caswell Park Thursday.

After falling behind 9-1, the Vikings (19-7 overall) tallied eight runs in the top of the fifth off the defending champion Dutchmen (25-3 overall) to tie the game at 9-9. Kate Kruger capped the rally with a three-run homer to center field.

“It felt really good off the bat. I was hoping [it would go],” Kruger said. “It shows that we can play with the big dogs. They’re ranked number one and losing by one is huge, because a lot of their games are 10 run games. We know that if one person gets a hit, everyone gets hitting.”

The Dutchmen took the lead for good with a two-out RBI double in the bottom of the fifth, but Jacie Gustine picked up a bases loaded strikeout to keep Hayfield within striking distance.

Hayfield had a chance to tie the game when Kyal Heydt led off the top of the sixth with a double, but she was stranded at second base.

Kruger said the third place game is a pretty good place to be for Hayfield, which was 0-4 in its past two state tournament apperances.