Value of the written word

George Hormel went to school until 1872-he would have been 12 that December. However, his command of the written word was evident through the rest of his life. He was an avid reader and he talked about how books from his childhood influenced him and attributed to his communication skills.

He wrote that his father’s love of reading taught him valuable lessons. 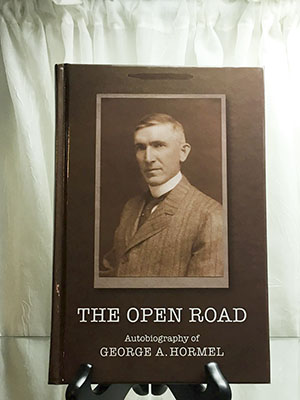 “The Open Road,” the autobiography of George A. Hormel. Photo provided

“Father loved to read, and although in those days there were no city maintained or endowed libraries, we did have access to a few books. We could have bought books, no doubt, in Toledo, but we had so little money to spend. The church to which we belonged, and others we sometimes attended, usually had a small collection of books, however, for lending. It was from these sources that we obtained ‘Uncle Tom’s Cabin’ and other popular books of the day.

Father subscribed to the ‘Youth’s Companion’ for us. This we read and lent to neighboring children until it fell apart.”

While working in Chicago as an older teen, he enjoyed reading poetry and the works of Shakespeare. Upon donating his home to the YWCA, Mr. Hormel left behind his encyclopedias and numerous other books. Unfortunately, those books are no longer in our collection, but I imagine they included a wide variety of authors and genres to cover both George and Lillian’s tastes.

Most of the writing I have seen of George’s includes letters of his early days in business and in Austin. He wrote often to his parents and shared stories of his travels and his life on the road.

In a letter he wrote to his son, Jay, in 1930, he grew philosophical as he compared the act of tending a garden to that of running the 39-year-old Hormel Company. Statements like the following were examples of his efficient prose:

“When I planted my garden I had virgin soil to start with and everything grew luxuriously and continued so for nearly two years. The lawn was like velvet, the shrubs and flowers all looked happy, and everything was in its glory.” In comparing the garden to the business, he wrote to Jay, “Since the war you started in with virgin blood which has had the rich opportunity to make possible the wonderful growth [of the company].”

Now his words have been officially published by his two grandsons, Tom and Jim. “The Open Road” is George’s reflection on his life. He shares his views on the value of family and faith, business practices, and world events. A man who left school at the age of 11 possessed a way with words that served him well.

Get your copy of “The Open Road” at the HHH today.

Directed by Brian Koser, this local music favorite has an annual tradition of performing at the HHH. Join us for classic jazz and fun arrangements performed by local musicians. Featuring guest saxophonist John Paulson. Free