To understand Viking culture, take a look at their plates 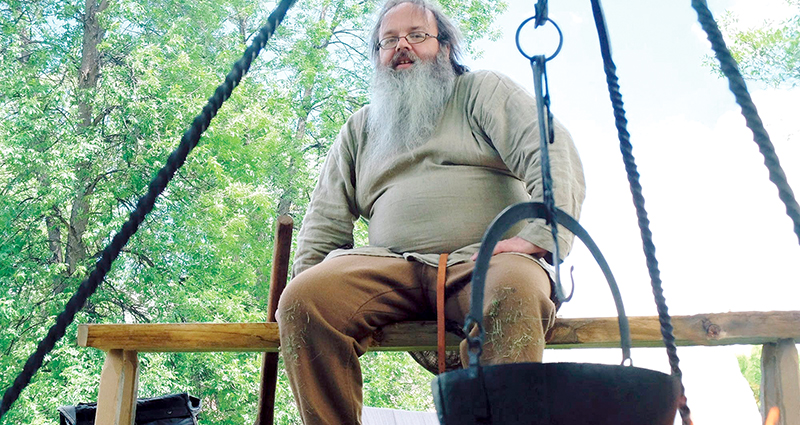 Daniel Serra likes to bust myths about Vikings. Like the image of Vikings gnawing on huge chunks of meat pulled from the fire.

“It’s a myth of course, and it’s the myth of the barbarian, the wild man,” said Serra, a Swedish culinary archaeologist. “To start with most of the Vikings would have been farmers or traders. You had the fighters and raiders of course, but that’s just a small part of it.”

Viking food varied depending on the region, but Serra said most food in the Viking age was boiled in clay, soapstone or iron pots.

Vikings had knives, spoons and fingers, but no forks. That meant food was usually cut up before it was cooked to make it easier to eat. And dried or salted meat needed a good boiling to be rehydrated so it could be eaten.

Serra has spent years immersed in Viking Age history and he looks the part. A long flowing beard is whipped by the wind as he stands in swirling smoke tending an iron pot boiling sausage over an open fire in Moorhead, where he’s appearing at the Midwest Viking Festival.

He grins as he pats his slightly rotund middle and explains his choice of research might have been influenced by his fondness for food. The Vikings left little documentation of what they ate, but Serra studied archaeological finds, and pored over Norse sagas and medieval texts to develop a list of ingredients and cooking techniques that were likely used during the Viking Age that lasted about 300 years from the 8th to 11th centuries.

Food archaeology became his specialty. Through research and trial and error he developed recipes he says are as “historically accurate as possible with the information we have”.

He co-wrote a cookbook called “An Early Meal: A Viking Age Cookbook and Culinary Odyssey.”

Of course, fish was a staple for many Vikings. Stockfish was a dried cod which Serra says is much drier than beef jerky; he describes it being “like a block of wood.” Preparing stockfish involved beating it with the back side of an ax.

“A medieval cookbook says you should beat your stockfish for a good hour. When I tried it, the good hour was two hours and I smelled like … well put it another way, cats really loved me that day,” said Serra with a chuckle.

The Vikings often survived on this leathery cod, but no; the Vikings did not create or eat lutefisk. Serra glances surreptitiously over his shoulder before sharing this bit of culinary heresy.

Aside from dried fish, Vikings apparently didn’t hunt or gather much. Serra says most bones found in archeological sites are from domestic cattle, sheep and goats. And Vikings grew most of the grains and vegetables they ate.

They made bread from the grain and, more importantly, beer. Serra says beer was a staple, an every meal drink. It had health benefits, helping prevent waterborne illnesses and providing some necessary nutrients.

Beer was mostly brewed in open vats without hops. Instead, Vikings used aromatic plants like bog myrtle for flavor.

“If you don’t serve the beer when you have it, people will take offense,” said Serra, adding with a laugh, “And that is important today as well, I think.”

The pleasure of good food aside, Serra finds value in learning about historical food culture.

“It is an understanding of how people are living.This is giving an everyday understanding of life,” said Serra. “Everyone can relate to people eating. And that makes it a very good way of displaying history I think.”

Serra demonstrated Viking cuisine Friday and Saturday at the Midwest Viking Festival in Moorhead. Next Tuesday and Wednesday he’s at the American Swedish Institute in Minneapolis.