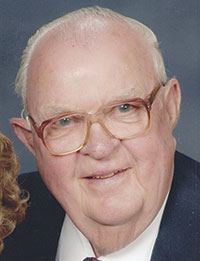 Tommy was born June 28, 1926, at Oakland, Minnesota, to Eric and Sarah Mae (Mann) Lerum. He grew up on a dairy farm and attended country school in Oakland and later attended Austin High School. He served in the U.S. Navy Air Corps from 1944 to 1946. After his service, he went to work for the Geo. A. Hormel & Co., retiring after 34 years. Tommy married Marian Snell on Sept. 23, 1951, at the Presbyterian Church in Oakland.

Tommy was a 71-year member of the American Legion and he was also a charter member of Westminster Presbyterian Church where he served as a deacon and was instrumental in installing the church bell. One of his favorite church activities was to help organize, cook and serve the pancake meal.

He was an avid trapper, hunter and fisherman and always helped friends and family butcher deer and chickens. He loved to garden and enjoyed giving away the fruits and vegetables of his labor. He liked to play cards including 500, whist and bridge and especially loved watching the Minnesota Twins. Tommy was a devoted husband, father and grandfather; he even taught his grandchildren how to make lefse.

He was preceded in death by his parents; wife, Marian; daughter and son-in-law, Linda and Gary Schroeder; and siblings, Charles “Doodle,” Edna, Chester “Chet,” Roger and Vivian.

Funeral services will be held at 11 a.m. on Monday, June 19, 2017, at Westminster Presbyterian Church with the Rev. Michael Olmsted officiating. Interment will be at Fairview Cemetery, Oakland. Visitation will be from 5 to 7 p.m. on Sunday, June 18, at Clasen-Jordan Mortuary and at the church for one hour before the service on Monday morning.