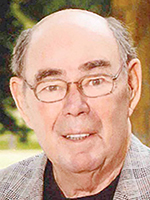 He was born on May 29, 1937, in Sleepy Eye, Minnesota, to Stanley and Eileen (Lattimer) Hentges. Tom attended St. Mary’s Catholic High School in Sleepy Eye, where he excelled at sports. Tom was named to the All-Conference team in 1953 and 1954. As captain, he was also named to the Catholic All-State team, as well as the All State Football Team. In basketball, Tom made the Region IV team in 1955. Tom’s leadership was acknowledged as he served as a delegate to Boys State in 1954.

After graduating in 1955, Tom joined the U.S. Navy in active duty from 1956-1958 and attended college. He met his wife, Judith McCabe, in Rochester, Minnesota, and they were married on Aug. 1, 1959, at St. Raphael’s Cathedral in Dubuque, Iowa. In 1963, he was transferred to Rochelle, Illinois, where he continued his employment with Del Monte. In 1964, he was employed as a sales manager for Caron International, later by Hanora Mills, in the textile industry, where he enjoyed planning the annual Chicago Men’s Yarn Club Golf Tournament until his retirement in 2007. After Judy’s passing in 2001, Tom married his second wife, Sandra, in 2006, and they resided in Austin.

Tom was an avid golfer and reader. He enjoyed football, traveling, planning family vacations, and spending time with his family and his many, many friends. Tom’s accomplishments are the direct results of his hard work, dedication to his goals, and desire to succeed.

Tom was preceded in death by his parents; his wife, Judith McCabe Hentges; and two children, Tamarah Elizabeth Hentges and Christopher John Hentges.

Funeral services will be held at 11 a.m. on Saturday, June 3, 2017, at St. Augustine’s Catholic Church, 405 Fourth St. NW, Austin, MN 55912, with the Rev. James Hentges officiating. Visitation will be from 10 a.m. until the time of service at church on Saturday. Private burial will follow.

The Hentges family would like to extend our gratitude to all the staff, doctors and nurses of the Mayo Clinic, and the staff at the Primrose Retirement Community, who cared for Tom, for their attentiveness and loving care. In lieu of flowers, memorials may be made in Tom’s name to the Leukemia & Lymphoma Society.