Al Franken: The health care debate affects all of us 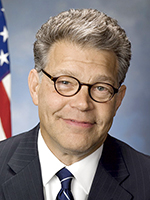 As I’ve traveled across Minnesota in recent months, Minnesotans have made it clear to me just how important health care is to them, their families, and their communities.  They want to know that when they are sick or injured they can get the care they need.

Because health care is so important, most people in Minnesota understand what’s at stake as they’ve watched Congressional Republicans continue to push to repeal the Affordable Care Act (ACA) and replace it with a plan that will rip health coverage from 23 million people, raise health costs, gut Medicaid, and eliminate nationwide protections for people with pre-existing conditions.

I have had meetings in large and small Minnesota communities during which I’ve heard parents tearfully describe their struggle to get care for family members with chronic health conditions and their anxiety about the financial and emotional burden of supporting an elderly loved one in a nursing home.  They are worried about what the Republican plan would mean to them.

I’ve also heard from health care providers, who have told me they likely won’t be able to deliver many of the essential services their patients and communities need if the Republican plan is enacted.

Unfortunately, Republicans are recklessly moving forward with their destructive efforts and may hold a Senate vote on their bill in just a few weeks, despite the fact that that this bill remains at its core a giant tax break for the wealthy at the expense of care for the poor and vulnerable. If this bill passes, millionaires would receive an average tax break of more than $50,000 apiece each year and the 400 highest-income taxpayers, with annual incomes above $300 million, will do even better, with an average annual tax break of $7 million each annually.

Nearly all major doctor, hospital, nursing, patient and consumer groups strongly oppose the plan because of the harm it will do to so many Americans. Now is the time to speak up and fight to oppose this bill so that all Minnesotans can maintain access to the high quality care we are known for.

Minnesotans understand that this bill will harm the health and well-being of millions of people in our state and across the country.

The proposed Medicaid cuts offer a clear example.  The Republican bill would cut $834 billion from Medicaid, which covers more than half of all nursing home residents, half of all births, and is the primary source of coverage for people with disabilities.

The program is jointly funded by states and the federal government, which means that under the Republican plan, Minnesota stands to lose $2.5 billion in Medicaid funding in the first 18 months alone, and those losses would climb to $5 billion per year over the coming years.

Make no mistake, people in Mower County will be hit hard. The state estimates that 9,615 Mower County residents who have health care coverage through Medical Assistance or MinnesotaCare would be at risk.

The Minnesotans I’ve met with have described what these losses would mean to their loved ones, neighbors and communities.  Angela, a full-time health care worker at the hospital in Perham told me that for her, the Medicaid cuts “are personal.”  Through tears, she told me that her mother needs round-the-clock care, but if the Republican Medicaid cuts are enacted, her mother will have no place to turn to get the care she needs.

Later, at a Moorhead nursing home, I heard from Mari, who was able to care for her mother, Chrysann, at her home until declining health and complications required her mom to move to a nursing home. Mari said that without Medicaid, she, her husband, and their kids would not have had any other options. Chrysann is now worried about her own future, telling me that it seems like the Republican plan is not about taking care of people, but about “survival of the fittest.” This reform bill will take us in the wrong direction.

Need to Work Together

While the ACA has not been without challenges, most Americans want Congressional Republicans to end their divisive effort to repeal it, and instead do what we should have been doing all along: working together to improve it and build on its progress.

I have urged my Republican colleagues to join me in an effort to bring down health care costs. For example by addressing skyrocketing prescription drug prices that are driving up premiums and forcing too many Americans to choose between buying need medications and paying for basic necessities like food or rent.

We also need to increase competition in the health insurance exchanges. We should increase subsidies for middle class families, support a public option, and provide support to offset the costs of the sickest and most costly patients.

This important health care debate will impact people in Mower County and across our state in profound ways. As millions of Americans struggle to keep their heads above water – pay their bills, raise their kids, care for their parents, and cope with health problems – they need our help, not a plan that undercuts those efforts.  That’s why I oppose the Republican plan, and will fight to make health care better for all Americans.
Al Franken is a Democratic U.S. senator representing Minnesota.