A felon who led police to shut down two Austin roads for searches is likely getting another prison sentence soon.

Tom Heuangsayaseng, 31, of Austin, pleaded guilty to felony domestic assault in Mower County District Court Friday as part of a plea agreement. He had also faced charges for being a violent felon in possession of a firearm, third-degree domestic assault and gross misdemeanor theft in two cases. 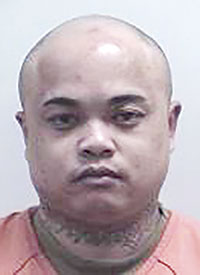 The plea agreement calls for an executed prison sentence, but he won’t be officially sentenced until Aug. 3.

Heuangsayaseng was arrested April 1, 2016, after multiple felony warrants were issued for his arrest after he allegedly assaulted a woman.

On March 31, officers were dispatched to the 1600 block of 12th Street Southwest and blocked the street to speak with the assault victim and searched, unsuccessfully, for Heuangsayaseng.

At around 7:40 p.m. on April 1, officers were searching for Heuangsayaseng on the 200 block of 12th Avenue Southwest, where they began speaking with Miranda Marie Brede, Shalayna Dee Belden and Andrew Lynn Gulbrandson.

Officers secured the area, and Brede at first repeatedly denied Heuangsayseng was inside the home, even after being told she could be charged with aiding an offender if she wasn’t telling the truth and he was in the home, according to court records.

Later, the Special Incident Response Team (SIRT) was called to the scene and Breded changed her story, saying Heuangsayaseng had been at the residence earlier but had left in his Escalade about five to 10 minutes before Gulbrandson got to the house.

However, officers informed her they had been watching the house for over an hour and no Escalade or any other vehicle had been or stopped at the house. Brede continued to tell officers he left in the car.

Gulbrandson and Belden then came out of the house, and police informed both of Heuangsayaseng’s numerous felony warrants. Both denied he was in the house, though Gulbrandson admitted to arriving about 30 to 45 minutes earlier that night in the truck.

After obtaining a search warrant, SIRT found Heuangsayaseng on the main floor living area at the base of the upstairs stairway and arrested him.

Heuangsayaseng was ßsentenced last July to more than three years in prison for felony third-degree drug sales and felony domestic assault in prior cases.