Suspect bikes across interstate lanes in attempt to flee police 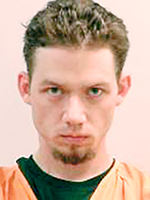 A 22-year-old Austin man faces felony drug charges after methamphetamine was allegedly found on him following a chase in which he led police up and down lanes of traffic on Interstate 90 on Tuesday.

According to the complaint, a police officer was dispatched at 6:40 p.m. to an area near 18th Avenue Northwest after police learned Kranz was seen riding a bicycle there. Kranz was wanted an an active warrant. According to court records, he had violated terms of release on an earlier drug charge and was now being sought by police.

Upon arrival, police saw Kranz near the Holiday Inn, and saw that Kranz was attempting to flee from them.

The report said Kranz fled south on Fourth Street Northwest, and then headed the wrong way down the eastbound I-90 exit ramp.

Another officer had maneuvered his squad car in front of Kranz’ bike, but Kranz allegedly rode into oncoming traffic on the interstate, in order to go around the squad car.

In doing so, Kranz collided with another officer’s squad car, that was parked behind the first officer. Kranz then allegedly rode across all lanes of traffic as the second officer pursued him on foot.

Kranz then allegedly crossed four lanes on Fourth Street Northwest and rode into Oakwood Cemetery. There, an officer tackled the suspect. Kranz was arrested, handcuffed and transported to Mower County Jail.

The report said officers found a .50 gram of methamphetamine on his person.

The report also said a syringe was also located at the bottom of the eastbound exit ramp.