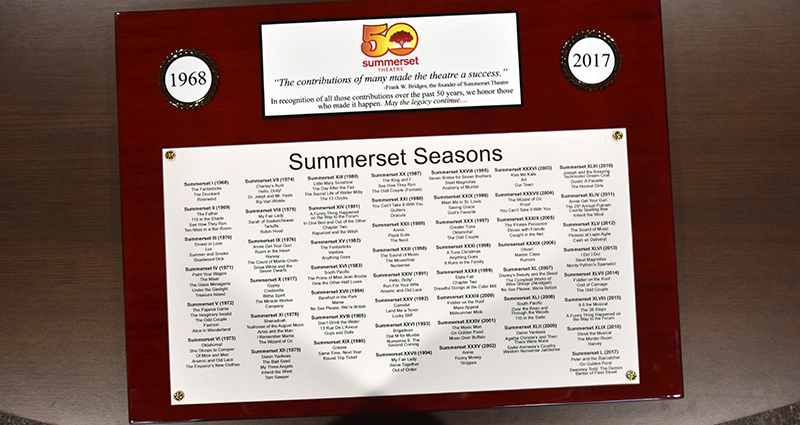 This plaque on 50 years of Summerset Theatre was unveiled Wednesday night during opening night of “Peter and the Starcatcher.” Jason Schoonover/jason.schoonover@austindailyherald.com

In honor of the milestone, a commemorative plaque was unveiled after Wednesday night’s performance of “Peter and the Starcatcher.”

Listed on the plaque are the names of every show performed by Summerset Theatre since Season I in 1968.

On the plaque is a quote from Summerset Theatre founder Frank W. Bridges: “The contributions of many made the theatre a success.”

Bridges, the namesake of the theatre at Riverland Community College, passed away in February.

“It is the first season [Frank Bridges] is not with us, so the entire season is being dedicated to him,” said Summerset Theatre Co-Director Randy Forster. “We know that he’s there in spirit watching over us, but it will be kind of bittersweet to not have him at any of the shows this year.”

Although Bridges had not directed or planned the Summerset Theatre shows for the past few years, he never missed the performances.

“We talked with Frank about the 50th season last fall,” Forster said. “He knew what we were producing this year and he was excited about it.”