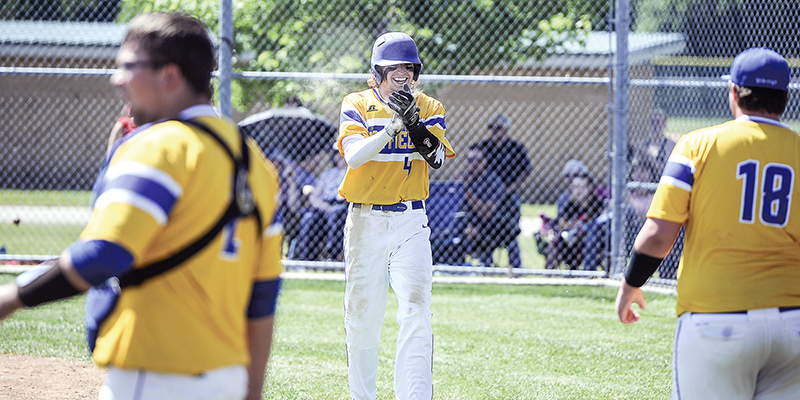 Hayfield’s Lane Canny celebrates after the Vikings took the lead over Randolph in the Sectino 1A Tournament Saturday morning at Riverland Community College. Eric Johnson/photodesk@austindailyherald.com

They did it the hard way, but the Hayfield baseball team is right back where it was two years ago. The Vikings are back in the Section 1A title game after they knocked off Randolph 4-3 and beat Janseville-Waldorf-Pemberton 6-3 in Riverland Saturday.

Hayfield is now two wins from its first Minnesota Class A state tournament in school history and it will have its chance when it plays Wabsha-Kellogg in Seltz Field 5 p.m. Tuesday. Two years ago, the Falcons beat Hayfield twice in the Section 1A title game to keep Hayfield from going to state and now the Vikings will be looking for a little pay-back. 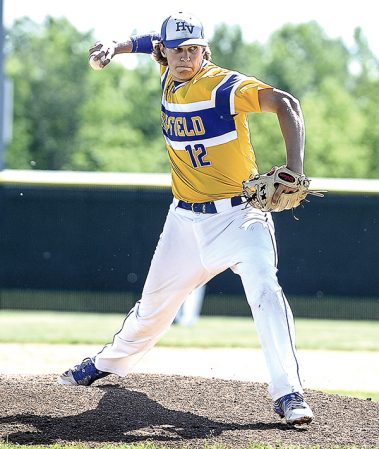 “They know it’s one game at a time and they’ve treated it that way,” Hayfield head coach Kasey Krekling said of his team. “They’ve done a great job. Wabsaha-Kellogg is in the exact same spot we were two years ago. We know that if we can get them in the first game it’s so hard to come back and play right away after losing.”

The Vikings took control early against JWP (15-8 overall), which had beaten Hayfield in the Section 1A West tournament. Hayfield scored four runs in the top of the first inning when Kolby Tapp doubled in a run, Brady Dahl had a two-run double and Owen Novotne doubled in a run.

Hayfield racked up 17 total hits between the two games on Saturday and senior Lane Canny was five-for-seven with a double and a triple.

“These last few games our bats have been super hot. I think we’re all jacked up from these big wins and we’re really sick of that red medal. We want to get that blue and get to state,” Canny said. “We’re just all so confident right now with our swing and it’s moving us forward.”

Hayfield had some big performances sophomore shortstop Mason Tapp and junior pitcher Zach Nelson against JWP. Tapp snared a line drive and tagged second for a double play to end a Bulldog rally in the sixth and he converted the last two outs of the game. Nelson picked up his third pitching win of the postseason after he had zero varsity wins in the regular season. 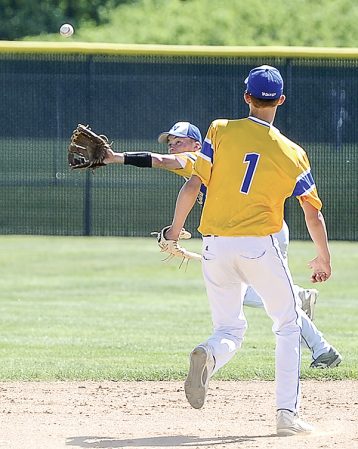 Hayfield’s Jake Olive reaches out for a flyball against Randolph in the Section 1A Tournament Saturday at Riverland Community College. Eric Johnson/photodesk@austindailyherald.com

“Mason is the most athletic kid you’ll meet and he’s so nice. I’m glad he had a great game because he deserves it. He doesn’t ever complain, he does whatever’s asked of him and he plays a phenomenal shortstop for us,” Krekling said. “Zach’s pitched phenomenal for us. He kind of solidified his spot as our number two this year and probably our number one next year.”

Hayfield kept its season alive against Randolph (17-5 overall) with some timely hitting. After Canny doubled to put runners on second and third with no outs in the fourth inning, Adam Fjerstad came up with a two-out RBI single to tie the game at 1-1 and Brady Dahl doubled off the left field fence to put Hayfield up 3-1.

Adam Fjerstad pitched out of a bases loaded jam in the first inning and he earned the win by allowing zero earned runs in five innings.

“I just had to hit my spots. I finally found my rhythm and I kept going,” Fjerstad said.

Randolph had the tying run on second in the seventh, but Nelson was able to get a strikeout to end the game.

Fjerstad’s pitch count was limited on Saturday, so he’ll be able to start the first game against WK on Tuesday. 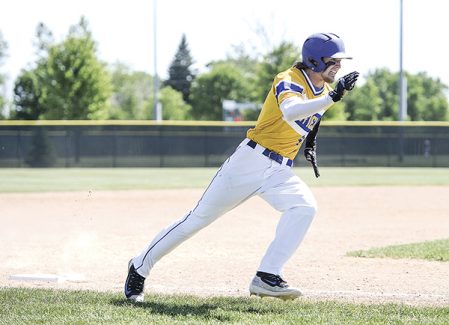