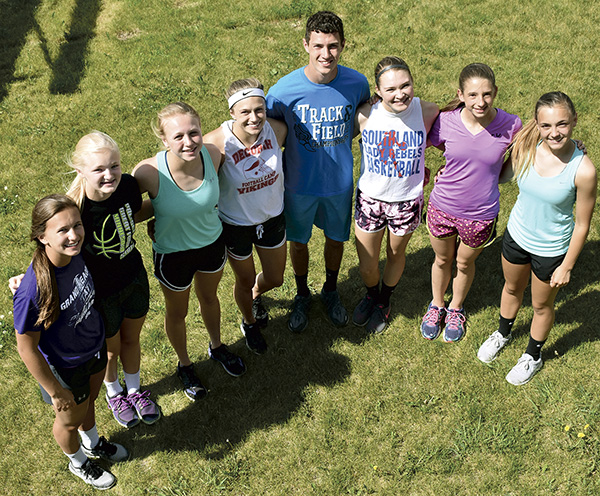 The GMLOKS girls will compete at state in the 4 x 100-meter and 4 x 200-meter relay at the state meet and every runner competing had to work hard to earn their spot on the team. Southland senior Katelyn Luthe had to look on as a bystander at last year’s state meet and she’s pumped to get a chance to run in both relays at state this season.

“This has been my lifetime goal since I started track and to end my senior year at state is probably the best feeling ever,” Luthe said. “It’s been beneficial to us because we have so many girls that are so fast and we all want to be on this relay team. All of our teammates pushed us to run faster and faster to get where we were last year. State has been in the back of our heads all season.”

Southland junior Emily Hovden, who will also run on both relay teams, said that the GMLOKS coaches did a good job of pointing out that relay spots must be earned due to all of the sprinters on the team. The relay teams feature runners from Southland, Grand Meadow and Kingsland, which has helped united the three school districts.

“It really brings us together more. Grand Meadow and Kingsland are kind of rivals, but when we come together for track we’re not rivals anymore. We’re friends,” Hovden said. “Last year was really nerve racking, but we did really well. I can’t wait to get out there and show them that we can be better than last year.”

GMLOKS has three athletes competing in individual events as Amelia Staat is seeded second in the 800-meter run; in the boys’ meet, Drew Lewison will run in the 110-meter and 300-meter hurdles and Peter Torkelson will compete in the 1600-meter run, where he took third last season.

Staat, who is a sophomore home schooler who lives in the Kingsland school district, ended up being seeded second after she took five seconds off her personal record time at the Section 1A meet.

She’s hoping she can keep running strong at state.

“I’m hoping to make it to the finals, but I’m still pretty nervous,” Staat said. “I’m really excited and wasn’t really sure if I would make it to state. I had to take my time down by quite a bit.”

Lewison, a Southland junior, is running in his first state meet and he’s hoping he can make it count.

“I’m pretty excited about it,” Lewison said. “Next year I hope to get faster, but I’m only guaranteed this time, so I’ve got to do the best I can and not hold off for next year. I think it’s going to be a lot bigger than the meets we’ve ran at all year and there will be a lot more completion.”

The Minnesota Class A state track and field meet will hold its preliminaries 3:30 p.m. Friday and the finals will be held 3:30 p.m. Saturday. The entire meet is held in Hamline University in St. Paul.

4 x 200-meter relay: The GMLOKS team of Katelyn Luthe, Emily Hovden, Riley Queensland and Lauren Buchholtz is seeded fifth out of 16 teams with a qualifying time of 1:46.33.

4 x 100-meter relay: The GMLOKS team of Luthe, Hovden, Kassidy Kirtz and Isabelle Olson is seeded out eighth out of 19 teams with a qualifying time of 50.40 seconds.

High jump: Blooming Prairie’s Sam Wurst is seeded 18th out of 18 jumpers with a qualifying height of 5-0.

Discus: Hayfield’s Katrina Thoe is seeded 10th out of 16 throwers with a qualifying distance of 116-7.

300-meter hurdles: Lewison is seeded sixth out of 16 runners with a qualifying time of 40.78 seconds.

Ludemann eclipses 200 yards as GM gets past Houston