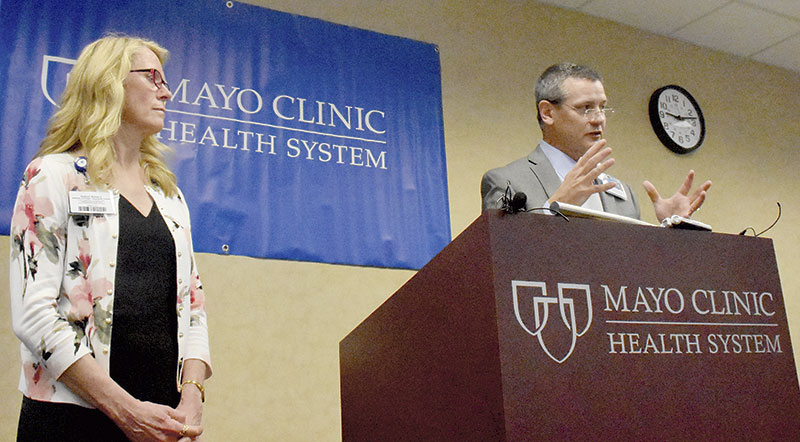 Bobbie Gostout, vice president at Mayo Clinic and leader of the Mayo Clinic Health System, left, and Mark Ciota, CEO of the two sites, talk about the changes ahead for services at each facility. Photos by Deb Nicklay/deb.nicklay@austindailyherald.com

A new childbirth center will be built in Austin as part of a $25 million Mayo Clinic Health System consolidation that will include the move of surgical, hospitalization and intensive care services from Albert Lea to Austin.

Coming to Austin are inpatient surgery, hospitalizations and intensive care, as well as the new childbirth center, to be located on property adjacent to the Austin hospital, said Ciota. However, the exact location is still being evaluated. The facility will be built over 2019 and 2020, he added.

All mental health services, including inpatient care and addiction services, will move in early 2019 from the Austin location to Albert Lea. The proximity to Fountain Center treatment services in Albert Lea could complement the operation, Ciota said.

The ICU will be the first to move, by October, and the inpatient surgeries will move to Austin by January 2018. The moves will require renovation of spaces that could be expanded at a later date, should operations grow. The Austin site, said Ciota, offered the best configuration for expansion of hospital rooms and services.

As a result, some space will become available in Albert Lea, which will provide flexibility and perhaps an offer expansion area for that site’s operations, said Ciota.

Staffing will not be significantly impacted. While Ciota said he would not say no jobs would be lost, he said if any were lost they would be minimal in number. He anticipated in the short-term that 30-50 jobs would move to the Austin location from Albert Lea. The two locations employ just under 2,000, Ciota said.

Mayo Clinic Health System — Albert Lea will send its inpatient surgery, hospitalizations and intensive care services to merge with Austin beginning this fall. Albert Lea will be home to all mental health services.

Ciota said while he recognized the announcement has caused concern in the Albert Lea community, he also noted that 95 percent of services will remain at both locations, including emergency care, primary care, including pediatrics and pre-and post-natal services; specialty care such as orthopedics, cardiology, endocrinology and neurology, outpatient services and procedures, and laboratory, radiology and pharmacy.

Gostout said the changes come after a careful year of study and the resulting plan is one that makes the most sense for a system focused on patient care first. It was the best option the way “facilities fit and what worked where,” she said.

She added some decisions were made based on the relationship between volume and quality; studies have shown that larger hospitals tend to have better outcomes for the patient, since the doctors are operating in a higher volume and doing more procedures. When you do a procedure more often, “you just get better at it,” Ciota said.

One asked if the building of a new Gold Cross Ambulance building might have played into the decision to move the hospitalization and surgery areas to Austin. Ciota said Mayo was aware of the move, but one project had nothing to do with the other, said Ciota. 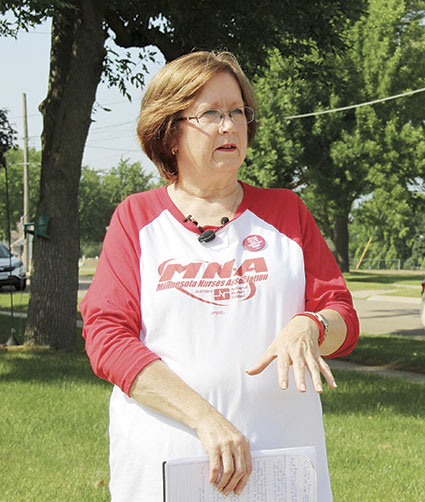 Kathy Lehman, co-chairwoman of the local bargaining unit represented by the Minnesota Nurses Association, offers reaction Tuesday morning to the announcement Monday that Mayo Clinic Health System will move most of its inpatient services to its Austin campus. Sarah Stultz/Albert Lea Tribune

Not all are excited for the move. Members of the Minnesota Nursing Association came to the press conference, but were not admitted entry. They talked to the media after the meeting away from the hospital.

“We were absolutely astounded at the scope of what they’re proposing,” said Kathy Lehman, local bargaining unit co-chairwoman, who is represented by the Minnesota Nurses Association.

Lehman, who works as a labor and delivery nurse, said she is concerned for the nurses’ jobs, as there are still many unknowns, but she is also worried for the patients in the community who they serve.

She said it will not only be an inconvenience for people, but she is worried about those who will have to be transferred to Austin, stating, “It can be a matter of life and death.”

Lehman said she considers a good full-service hospital to be an essential community service that many have come to rely on.

Fellow nurses Lacey Koopal and Angie Obermeyer said they were upset with the fact that the Albert Lea and Austin nurses are under two separate union contracts. They worry that long-time Albert Lea nurses will lose their seniority if they have to move to Austin and start over with a new union.

District 27 State Sen. Dan Sparks, a Democrat representing both Austin and Albert Lea, also issued a statement, expressing his “concern” over the move.

“I am very aware of the shortages of health care professionals across the state, but particularly in rural parts of Minnesota. That being said — the Albert Lea facility is the city’s largest employer — and this decision by Mayo creates a lot of uncertainty for Albert Lea clinic employees. I want to assure residents in both Austin and Albert Lea that I’ll be following this situation closely — because it’s vital that area residents have close access to affordable, high quality health care,” he said.