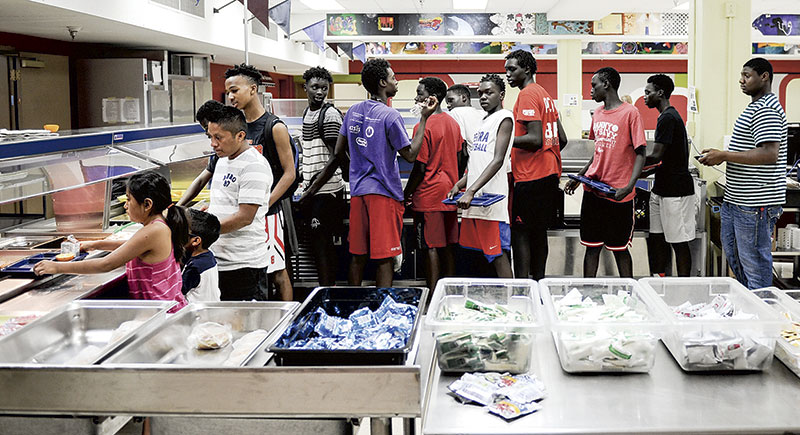 Kids taking part in the summer lunch program line up for a Friday meal at Austin High School. Eric Johnson/photodesk@austindailyherald.com

If there is any doubt about the need for a summer food program in Austin, just check in with how many lunches were served last Wednesday.

“That was 700,” agreed Mary Weikum, food and nutrition director for the Austin Public Schools.

This year marks the ninth summer that a food program has been offered, free of charge, to youth from age 1 to 18. Anyone can eat, but if they are an adult, they will have to pay $3.25 for the meal. No qualifying forms are needed by anyone eating a meal. Summer meals are federally subsidized.

The meals are being offered now from 11 a.m. to 1 p.m. at I. J. Holton until Aug. 25; and at the high school, until July 28. The shortened timeframe at the high school is due to some work being done in the cafeteria.

Meals are served Monday through Friday, except on July 4, Weikum said.

The federally-funded program mirrors the same food program that is served during the school year, with little difference. 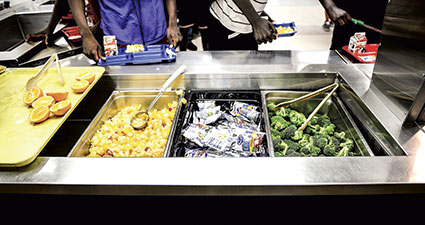 A hot item will be served each day, such as pizza, corn dog or some other hot sandwich; the meal will also offer a cold sandwich if preferred. A piece of fresh fruit, a vegetable and milk is also part of the lunch.

Need is apparent, since 60 percent of Austin’s student population qualifies for free and reduced meals during the school year.

“And we know that when our children are hungry, they are not as ready to learn new things,” she said. “Kids who are not hungry also have fewer behavioral problems in schools.”

This year’s number compares to 150 served on the very first day of the summer food program nine years ago, she said.

“It’s grown every year; we see families starting to depend on it more and more,” she said.

Meal locations will sometimes change, due to projects being conducted at the any of the schools, on any given year. Each school has a preparation kitchen, so changes are made easily, she said.

About 7 to 10 staff members work to serve the meals at the two sites, she said.

And, by the end of the school year recently, almost 1 million meals had been served in the 2016-2017 school year.

While she hears a detractor or two occasionally — “They don’t want their taxes being used that way,” she said.

But Weikum is clear on her own thoughts.

“What better use of our tax dollars can there be, than feeding our children?” she said.