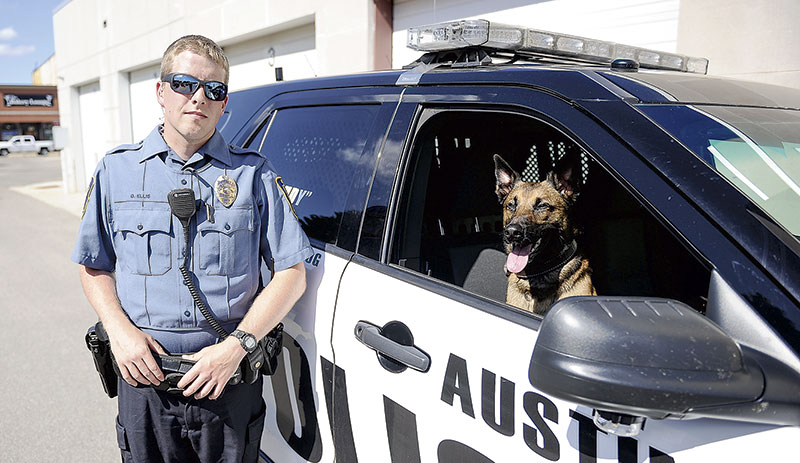 Austin Police Officer Derek Ellis’ K-9 partner Rudy rolled on the grass outside the Law Enforcement Center, enjoying a moment of relaxation in the sun.

It was after all, the end of a very long weekend for the duo.

Ellis and Rudy topped an 89 dog-handler field to take the top prize at the United States Police Canine Association Region 12 PD1 competition in Fargo, North Dakota this past weekend.

“It’s nice, just all the hard work and training him and I do,” Ellis said Wednesday as Rudy eagerly waited next to him for his ball to be given back. “That training has paid off.” 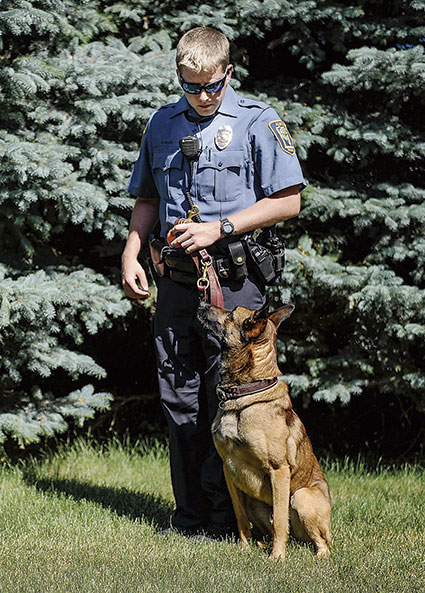 Rudy, a two-year-old Belgian malinois, has been training with Ellis for just about the same amount of time. At the competition the duo scored a 693 out of a possible 700 to take the top prize.

Dogs and handlers are judged in a variety of areas including obedience, agility and suspect searches, among others.

Ellis said the prize is a nice result to all of the work that goes into it.

“There’s a lot of training and that’s tough,” Ellis said. “But it makes it worth it.”

Ellis follows in the footsteps of Mower County Sheriff’s deputy Jeff Ellis who himself was a K-9 officer and won both several regional and national awards.

“I grew up in a law enforcement family,” Ellis said. “My dad worked K-9 with the sheriff’s department. I kind of knew what to expect.” 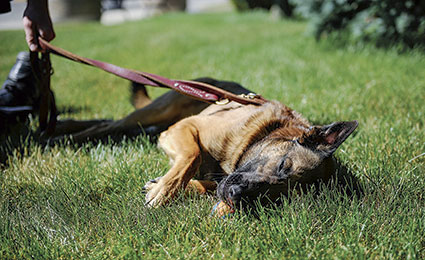 “We’re already pretty close,” Ellis said. “He’s really my pet when we’re at home. We’re together 24/7 and we’re going up there really to just have fun and do all the trials. I would say we’re closer than we were.”

Ellis also got help from fellow officer Ryan Leif who for years has helped K-9 officers with bite tests.

“It doesn’t seem like a lot, just putting on the sleeve and taking a bite from a dog,” Ellis said. “There is a lot that goes into it. Without him, I don’t think we would be where we are today. It takes a special kind of person to be able to run from a K-9 and take a bite consistently.”

Austin Police Chief Brian Krueger said Ellis’s win is not only a point of pride for Ellis and Rudy, but the department and city of Austin as well. 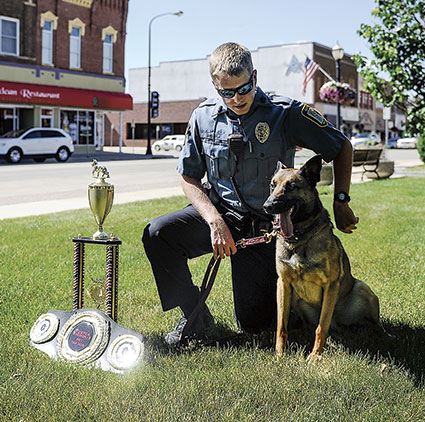 Police officer Derek Ellis and Rudy pose next to the hardware they brought back from the regional competition.

“Obviously we’re proud of our K-9 program,” he said. “Lt. [Matt] Holton has set the bar extremely high, winning a national championship himself. He’s dedicated basically his entire career to the program and to see someone so young come in with the dedication that Derek Ellis has, it’s great to see in a young man, a young officer.”

Ellis said he’s eyeing a step to the national competition after this.

“If we go to the national trial, I would like to do it the best we can,” he said. “But really, it’s just trying to get better and having fun with it. He enjoys it, I enjoy it.”