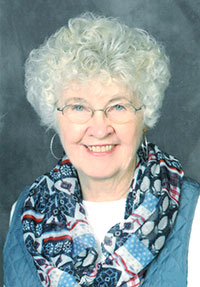 Ruby was born June 20, 1936, to George and Ragnhild Simonson in Sargeant Township, Sargeant, Minnesota. She was baptized July 7, 1936, at Evanger Lutheran Church and was confirmed at First Lutheran Church in Blooming Prairie, Minnesota, in 1950. She attended school in Blooming Prairie and was valedictorian of the class of 1954. After high school, she attended the College of Medical Technology and was awarded a diploma as a medical technician in 1955. She accepted a position with the Mayo Foundation Cancer Research, University of Minnesota. She later worked in labs in California, Virginia and then returned to Minnesota and worked at Hormel in Austin. On June 30, 1962, Ruby was united in marriage to LaVern Klingfus at St. John’s Lutheran Church in Austin, where they made their home and raised four boys. Ruby graduated from Austin State Junior College in 1968 with an associate of arts degree. Ruby returned to school and attended Mankato State University and graduated magna cum laude in 1976 with a degree in health and sciences. She later returned to Mankato State University, where she earned her master’s degree. She taught science, biology, and in the Area Learning Center at Austin High School before retiring in 2001. Upon retirement, Ruby and LaVern moved to a lake home in Cass Lake where she was active in the local community with the American Legion Auxiliary, volunteered at the local food shelf, and participated in local Bible study and book club groups. Ruby was a member of Sons of Norway and the American Legion Auxiliary.  She was an avid world traveler and traveled with her sons and family to Norway on several occasions. She was very proud of her Norwegian heritage and recently attended a family reunion in Norway in the summer of 2016.

A memorial service will be held at 11 a.m. Wednesday, June 7, 2017, at First Lutheran Church in Blooming Prairie. The Klingfus family will greet friends from 10 to 11 a.m. at the church. Interment will be in the Evanger Lutheran Church Cemetery in rural Sargeant. Memorials may go to the donor’s choice. Worlein Blooming Prairie Funeral Home is handling the arrangements. Online condolences may be expressed at www.worlein.com.

What’s to blame for Twin Cities traffic congestion? Is it…