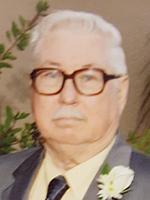 Roy H. Wold, 74, of Rapid City, South Dakota, passed away peacefully on Tuesday, June 6, 2017, at his home after a lengthy illness.

In May of the following year, he entered the U.S. Air Force, serving until his retirement in November of 1981 after 21 years of military service.

It was in the military that he was trained as a dental lab technician, which became his lifelong career.

After his military retirement, Roy became a partner in Associated Dental Labs in Rapid City from 1981 until 1990 and again from 2001 until 2008. Between his years at Associated, he worked at Sioux San Indian Health Services.

Roy married Louise Kline in August of 1984 in Rapid City.

Roy was always looking for the next great money making venture. He dreamed of someday owning and operating his own consignment store where he could buy low and sell high. He enjoyed craft fairs and bargain hunting. Roy also enjoyed random conversations with numerous people, where they would leave knowing he was genuinely interested in their lives. He will be dearly missed by his family and friends. Roy was a self-proclaimed rock hound, acquiring an extensive collection of agates.

Roy was a lifelong member of The Retired Enlisted Association.

He was preceded in death by his parents; his sister, Janice Lestrud; and his brother, Clifford Wold.

A memorial has been established.

Interment with military honors will follow at 12:30 p.m. at Black Hills National Cemetery.

Friends may sign his online guest register at www.osheimschmidt.com.