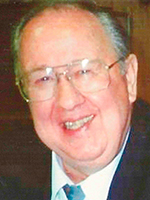 Richard Sylvester Hansen, 84, died Sunday, May 28, 2017, at his home surrounded by his loving family.

Richard was born June 27, 1932, in Austin, Minnesota, the eldest child of Virtus and Colette (Heimer) Hansen. He attended Queen of Angels Grade School and St. Augustine High, Class of 1950.

He was united in marriage to Sharlene Ellison in 1951 at Queen of Angels Catholic Church in Austin. To this union five sons were born: Michael, Craig, Bret, Bart, and Wade. Sharlene passed away unexpectedly on Nov. 2, 1992.

Richard began his working career while still in high school. He worked for Buechner Lumber Co. and later Rayman Lumber Co. He retired from Rayman Lumber Co. to become the caretaker of the Austin Lane Condominiums. He also enjoyed working for his brother, Red, At the Riviera Supper Club.

In 1994, he married Veronica Gibart at St. Augustine Church.

He was preceded in death by his first wife, Sharlene; his parents; one sister, Judy Hansen; his mother and father-in-law Vern Ellison and Mildred Price; brother-in-law, Bennie Ostrander; and sister-in-law, Kathleen Mildenstein.

A funeral Mass will be celebrated at 11 a.m. on Thursday, June 1, 2017, at St. Augustine Catholic Church with Father James Steffes officiating. Visitation will be from 9:30 to 11 a.m. before the service at the church. Interment will be at Calvary Cemetery.

A special thank you to the Mayo Hospice of Austin for their excellent care and concern.

Memorials are preferred to the American Cancer Society, St. Augustine Church or the charity of the donor’s choice.