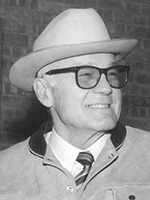 Richard Harding “Dick” Plunkett, 93, passed away peacefully from congestive heart failure at his home in Rochester, Minnesota, on June 9, 2017, with loving family and his German shepherd Mox at his side.

Richard was born on Sept. 6, 1923, in St. Paul, Minnesota, to Hugh V. and Lillian (Klein) Plunkett. The family moved to Austin, Minnesota, in 1927, where he grew up and graduated from Pacelli High School. He began studies at the University of Minnesota in September 1941 on a football scholarship, but his education was interrupted by World War II, and he went into the U.S. Army at age 19 in July 1943 through the Army Specialized Training Program.

He served with the 7th Army, 71st Division, 66th Infantry Regiment, Military Police Platoon, and later with Patton’s 3rd Army. He served as a bodyguard to Generals Wyman and Patton, as well as went on patrols, where his heroic actions earned him the Bronze Star Medal.

After his honorable discharge in 1946, he returned to the University of Minnesota and received a bachelor’s degree and a law degree, the latter in 1950. He then moved to Rochester with his wife, Helen (Graupmann), whom he married Sept. 2, 1950, and opened a law practice specializing in labor law. In 1957, Helen passed away and in 1958 Richard married his second wife, Anne Marie (Leddy).

Richard stepped in to the business world, and in 1958 he founded Rochester State Bank (later Rochester Bank), where he remained president until its sale in 2006. He was a pioneer in cable TV in the 1960s, building and operating cable TV systems in Minnesota and Wisconsin for the next 40 years. He also developed and owned real estate properties in Rochester.

Richard was also politically active. He was a member of the Minnesota DFL party in its formative years, and served as Olmsted County DFL chairman and district vice president. He served as Minnesota State Boxing Commissioner, appointed by then Gov. Wendell Anderson, where he drew upon the experiences he had boxing in his youth and competing in Golden Gloves competitions.

Richard had a multitude of interests and passions, among them were exotic birds, horses, particularly dogs and specifically Schutzhund dog training. He helped fund and develop law enforcement K-9 units in the area, including those of the Rochester police and sheriff’s departments. He sponsored K-9 training workshops at his home and helped K-9 units in Minnesota and northern Iowa acquire their first dogs.

Richard’s primary focus and deepest love was his family. His favorite times were family times; riding horses together, traveling to Europe and Mexico, sharing favorite poems and songs around family meals, which he enthusiastically helped prepare. Richard was a man of deep Catholic faith and was proud of his Irish and German heritage. His life was full, his character was strong, and he left a lasting impression on all who knew him. His family will miss him deeply.

Richard was preceded in death by his first wife, Helen (Graupmann); his second wife, Anne Marie (Leddy); his brothers, Hugh Jr.; and Roger, and recently his son, Richard Jr.

A funeral Mass will be celebrated at 10 a.m. on Friday, June 16, the Church of St. John the Evangelist in Rochester, preceded by a visitation at 9 a.m., with a luncheon to follow. Interment will be after the luncheon in a private ceremony.

Online condolences are welcome at www.mackenfuneralhome.com.