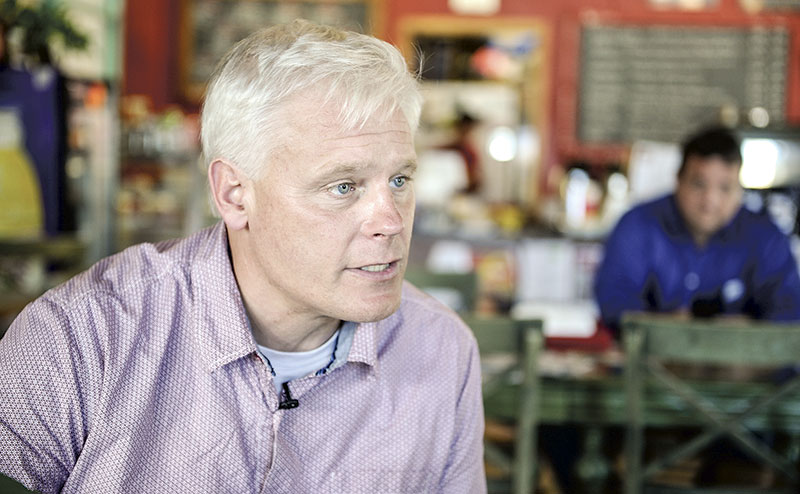 Paul Thissen talks about his recently announced run for the governor’s seat during a stop in Austin Thursday. Eric Johnson/photodesk@austindailyherald.com

Minnesota Representative Paul Thissen (DFL-District 61B) announced that he would run for governor on Thursday.

“There are two reasons I’m running for governor,” he said. “The first is there are huge economic forces bearing down on Minnesota families and we need a governor that is going to stand-up and fight for the average Minnesotan. Second is I want to make sure we’re listening to people. If we bring energy from outside the capital, we’re going to go a lot farther.”

Thissen, who was Speaker of the Minnesota House from 2013 to 2015, Stopped at various locations in southern Minnesota on Thursday, including The Coffee House on Main in Austin, where he fielded questions from reporters.

Thissen praised Austin’s ability to incorporate the community into problem solving, citing examples like Austin Aspires as what he hopes to accomplish as governor.

“That’s a model for us going forward,” he said.

Thissen is currently in his eighth two-year term in the Minnesota House of Representatives. He represented District 63A from 2003 to 2013 and was the Minnesota House Minority Leader from 2015 to 2017. His current district, 61B, is a safe DFL district located in southwest Minneapolis.

This is Thissen’s second attempt to run for governor, having made an unsuccessful bid in 2010.

“We spent a lot of time traveling in Minnesota [in 2010], and I want to replicate that part of the campaign,” he said. “The difference between now and then is after that, I served as the leader of the Democrats in the House, so I’ve learned from that the different perspectives that people bring to policy making. You learn pretty quickly what Minnesotans share in their values and how they’re different.”

Thissen was critical of the current situation in St. Paul.

“It’s a terrible situation and a symptom of how broken our politics are,” he said. “We should never have gotten to this place, and that is true for both sides.”

Thissen will be facing heavy opposition in the DFL field, including Congressman Tim Walz, who announced his candidacy in March. But he feels this will be a positive campaign among the candidates.

“This is going to be a campaign where all of the candidates get along and strengthen each other,” he said.

So far, six Democrats and four Republicans have declared their candidacy for Minnesota governor.