Renovated Children’s Museum reopens and the kids love it 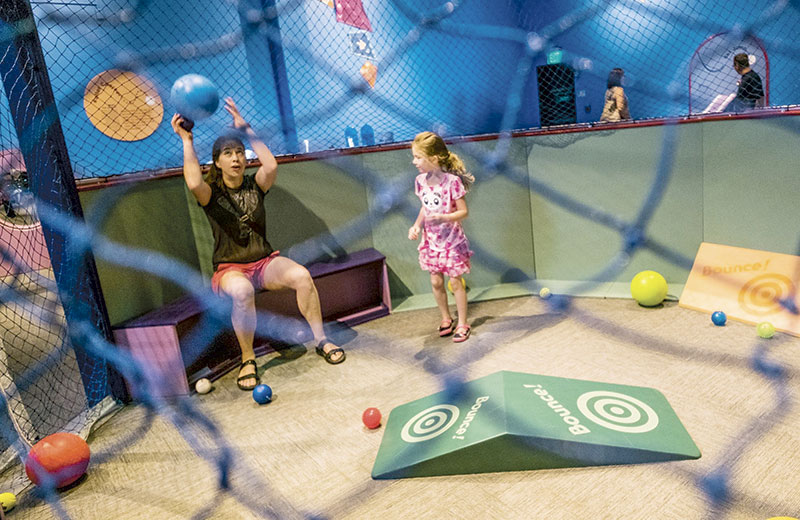 Briar Lamm, 6, and her mom, Jamiee, bounce balls off different angled surfaces inside the Ball-O-Rama room inside the Minnesota Children’s Museum in St. Paul on Friday. Evan Frost/ MPR News

One and a half years and $30 million later, the renovated Minnesota Children’s Museum reopened Wednesday.

The downtown St. Paul museum was redesigned with a new philosophy of play in mind.

There’s more open space than before, and that’s intentional.

The key philosophies behind the renovation are unstructured free play and more physical activity, said Barbara Hahn, the museum’s vice president for learning innovation. She guided the redesign and development of 10 new exhibits.

But there’s a notable enclosed space, too — it’s a huge metal slide. And there’s also a four-story climbing tower and a netted catwalk that hangs 40 feet above the ground.

Eric Bergeron, 10, and his 8-year-old sister Laysa were visiting from Wyoming last week were among the first kids to try the slide during a sneak-peek event.

“I went oooooo and I came out and hit my butt on the very bottom. So I went about 3 feet,” Eric recalled. His sister added, “The slide was, I think I went 4 feet, one more feet than my brother.”

Eric wasn’t sure about that last part. “I think I went 4 feet, too,” he said.

Another part of the renovation is an updated version of the “Our World” exhibit, which uses real world sets like that productive post office, a fire engine and a farmers’ market. There’s also a hands-on arts studio. It has paper, pens and even a sewing machine.

At the sneak peek last week, Meghan Yancy of Brooklyn Park watched as her children made books and other crafts.

Yancy’s children range from 17 months to 8 years old. The family has been one of the museums about 16,000 member families for several years.

With the new renovation, she plans to return as often as possible.

“I’m sure a lot of moms experience when you go places it’s like, ‘don’t touch this, don’t do that and you can’t play with that,’ and it’s kind of just like they get to be and live and play,” she said of the Children’s Museum. “There’s a lot of freedom in it. So it’s been cool to see them just go nuts.”

The Children’s Museum also has new and redesigned outdoor play areas — one on the rooftop and one on the ground floor.

A block party to celebrate the renovation is scheduled for June 17.