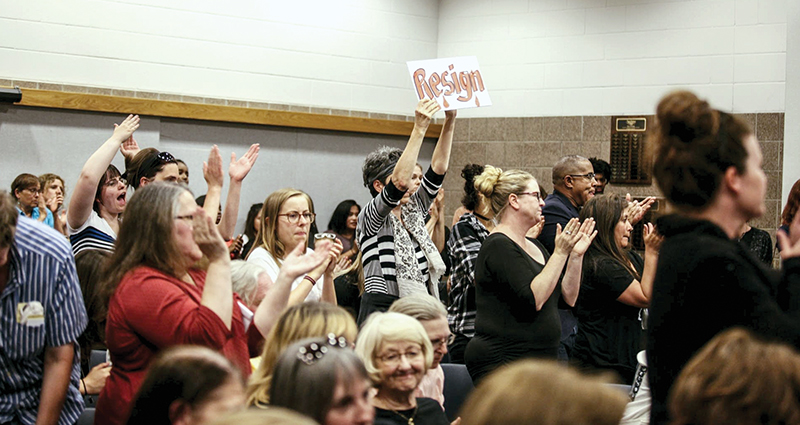 St. Anthony — More than 100 people attended St. Anthony’s City Council meeting Tuesday night, many demanding that Mayor Jerry Faust step down. Protesters brought a litany of complaints about the city under his leadership during more than two hours of community forum.

Sandi Sherman read a statement from the St. Anthony Villagers for Community Action, saying Faust “has demonstrated a pattern and practice of ignoring and dismissing concerns, compromising the well-being of many community members. He has become a liability to our city and the results of his decisions are fiscally damaging to our community.”

Sherman was talking about the killing of Philando Castile by St. Anthony Police Officer Jeronimo Yanez. Just over a week after Yanez’s acquittal by a Ramsey County jury, the city of St. Anthony announced a $2.9 million settlement with Castile’s family.

But many in the room also were not happy about the city’s denial of a permit in 2010 to build an Islamic community center — for which the city was later sued. St. Anthony later reversed its decision.

Still others were upset the city did not intervene in the private sale of Lowry Grove, a mobile home park. The developer plans to close Lowry Grove on Friday.

Faust simply responded “No” when reporters asked for comment after the meeting.

Faust silently packed up his things and left the chamber.

Council Member Hal Gray said Faust was being treated unfairly and some of the things said about the mayor weren’t true.

“He’s a great leader, he really is. He’s done a lot of great things for this city,” Gray said. “Are there been mistakes made? Sure, there are mistakes made. I make mistakes. Everybody makes mistakes.”

Gray said the Castile case has been very difficult.

“Nobody expects to be in the kind of situation we were in. And I think we’ve all done the best we could do. Can we do more? Yes, of course, and we will continue to do more.”

Gray said the council approved the settlement with the Castile family in a closed door session. Meanwhile, the terms of Yanez’s separation from the police department are not final. The city says there’s no timeline for when the issue will come the council.