Poppe, Sparks get look at first leg of CRWD work 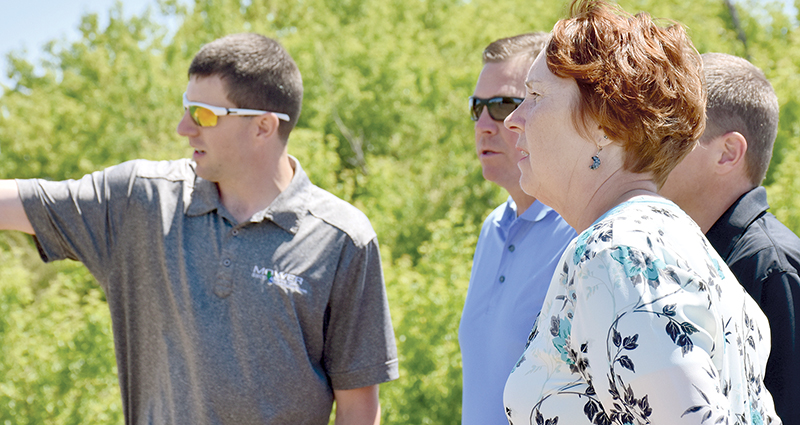 Cedar River Watershed District project manager Cody Fox, left, discusses the earthen structure that will help reduce flow in high water events by 50-60 percent, and keeping sediment and phosphorus out of Dobbins Creek. At right in Rep. Jeanne Poppe, D-Austin; to her right is State Sen. Dan Sparks. Behind them is CRWD administrator Justin Hanson. Photos by Deb Nicklay/deb.nicklay@austindailyherald.com

Rep. Jeanne Poppe and Sen. Dan Sparks, both DFL-Austin, got a first-hand look Thursday at the work that is supported in part by the $1.7 million they were able to secure in this session’s bonding bill for Cedar River Watershed District projects.

Aimed to reduce flooding and improve water quality, the $1.7 million is part of a larger $8.4 million capital improvement plan that will eventually encompass some 25 projects in the watershed. The funding will help provide a match of $3.2 million provided by The Hormel Foundation.

While getting a look at a first-step project on Thursday, officials also announced work on a much larger water retention project that gets underway this year at the headwaters of Dobbins Creek.

When completed — most likely in 2018 — the larger project will hold storm water from large rain events in an area that covers 50 acres — larger than East Side Lake in Austin.

On Thursday, the group gathered at the smaller project’s berm, which overlooks the creek.

The site is located in Red Rock Township, southeast of Brownsdale.

“It is an exciting time for us,” Hanson said, adding how appreciative they all were for the work done by the legislators.

“You have been absolute champs for us.”

Fox outlined the new project, noting the earthen structure is estimated to provide a 50 to 60 percent reduction in water flow and will keep up to 10 tons of sediment and 25 pounds of phosphorus from being dumped into the creek each year during rain events.

Hanson noted the site came as a result of cooperation by farmers Roger Oelkers and Duane Anderson; that partnership is vital, he said.

That, despite a climate which is often “charged with polarizing topics,” he said.

A full view of the earthen structure that will slow rushing water toward Dobbins Creek during high water events.

“But we look at it that we’ll do this because of our farmers — not in spite of them,” Hanson said, praising the farmers who came together to make the project work.

Poppe agreed that such partnerships are keys to real success.

“Building that relationship is a perfect example of working together toward the same goal,” she said.

Sparks agreed, adding that while he and Poppe worked hard to include the funds in the bonding bill, the fight was not over.

“We will be back asking for more,” he pledged.

There will be plenty of plans upon which to spend the money. The next, larger project, known as Dobbins 1, is estimated to cost $1.5 million and will build two retention structures or earthen dams along Dobbins Creek’s north branch in Dexter and Red Rock townships. Once completed, the project will reduce storm water flows by some 80 percent, keeping 134 tons of sediment and 218 pounds of phosphorus per year out of the creek.

The other projects range in size, complexity and location and generally relate to detaining storm water in storage structures built in upland or headwater farmland areas but can also include ravine stabilization and the reduction of flooding risk.

Basins or ponds collect and treat storm water runoff from drainage areas and release it in a slow manner; they may also trap sediment and debris from entering the waterway.