Packer trio is ready for state track and field meet 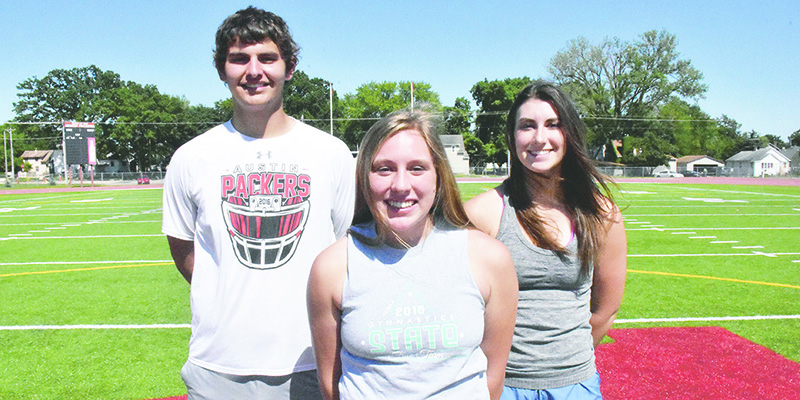 Two Austin senior throwers will be doing something no Austin athlete has done in a long time and an Austin pole vaulter will be back in the mix at the Minnesota Class AA state track and field meet in Hamline University in St. Paul Friday and Saturday.

Hansen owns the AHS school record in the shot put and the discus and she will throw for the University of North Dakota next season. She’s excited to wrap her run with the Packers at the state meet.

“I’m pretty excited to go to state, it’s been a goal of mine the last couple of years,” Hansen said. “When I hit the school record I started thinking about it. I wasn’t expecting to go to state in discus, but I was able to throw a big enough discus to get there. Going to state in shot and discus is crazy to think about.”

Hansen was able to find success at the Section 1AA meet by settling down and keeping her nerves in check.

“I just had to relax. For me, focusing too much is my down fall,” Hansen said. “I just have to just kind of clear my mind and know that I’ve gone through all of the hard work.”

Hagan was five feet shy of qualifying for the state meet in discus last season and that motivated him to work harder this season. By the time the Section 1AA meet rolled around this spring, he was feeling confident at making a run to state.

“I think it’s a really big honor,” Hagan said. “We’ve been struggling the last couple of years throwing-wise and now we have some guys succeeding. We have a couple of sophomores throwing in the 40s for shot put and a freshman throwing 130 for disc. I’m just hoping to come back and teach them what it’s like to go to state and hopefully they’ll be able to go.”

Hagan is hoping to throw in the 150s or as high as 160 at state as he’s looking to get to the finals. He said the feeling of breaking Austin’s 27-year drought of having a boys thrower make it to state was a great one.

“I can’t really describe it. Once that third thrower had a less distance than mine, I had no worries and it felt good to finally make it,” Hagan said.

Hagan will throw a the University of Sioux Falls next season. 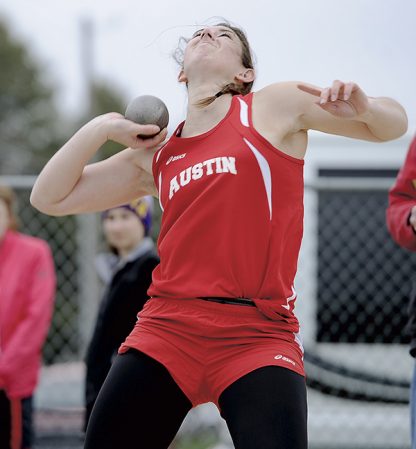 Marsh is coming in to the state meet with greater expectations this time around. While her qualifying height is 10 feet, six inches, she hit the height of 11 feet at the Big Nine meet.

“I didn’t really expect to make it last year. This year I’m thinking going into it that I deserve to be here and I can do better than I did last year,” Marsh said. “I just need to work on all of the things I’ve worked on this year and making sure it all comes together on one vault.”

Austin’s Pat Hagan is seeded 16th out of 16 throwers with a qualifying distance of 145 feet, 4 inches.

Shot put: Austin’s Amber Hansen is seeded fifth out of 17 throwers with a qualifying throw of 41 feet, 3.5 inches.

Pole vault: Austin’s Sydney Marsh is seeded 10th out of 17 vaulters with a qualifying height of 10 feet, 6 inches.

Discus: Austin’s Amber Hansen is seeded seventh out of 16 throwers with a qualifying distance of 129 feet, 7 inches.