Rescue personal extract a driver from a car involved in a two-vehicle crash Saturday just before 1:30 p.m. near the Walmart entrance on 18th Avenue Northwest. At least one was taken by Gold Cross Ambulance to the hospital. Eric Johnson/photodesk@austindailyherald.com

A man was arrested for a warrant after he was involved in a car crash that sent an 89-year-old Austin woman to the hospital on Saturday afternoon and fled the scene. 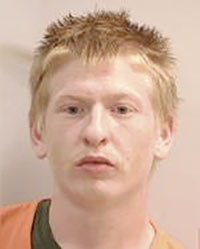 Lucius John Mead, 23, of Rochester was charged in Mower County District Court Monday with a felony for being a fugitive from justice from another state, as he faces felony drug charges in Iowa.

According to Austin Police Chief Brian Krueger, emergency personnel responded to a call of a car crash on 18th Avenue Northwest near the Walmart parking lot entrance by Auto Zone at 1:29 p.m. Saturday. Witnesses said a Dodge Stratus was pulling out onto 18th Avenue from the Walmart exit when a westbound 1988 Lincoln Town Car struck it.

Mead, the driver of the Lincoln, fled the scene and was apprehended at Hibbett Sports, where he was found hiding in the women’s bathroom. Police ran his name and found he had drug warrants in Iowa. Mead was then transported to Mower County Jail.

Emergency personnel had to remove the left front door of the Dodge with the Jaws of Life in order to reach the driver, an 89-year-old woman from Austin. She was transported to Mayo Clinic Health System in Austin after complaining about shoulder pain.