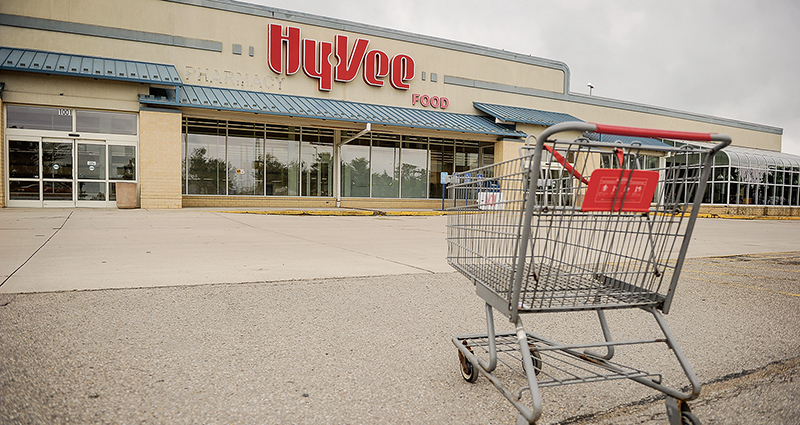 A lone cart sits outside the old Hy-Vee store. The Austin Port Authority hopes to enter an agreement with a Wisconsin firm to market the property. Herald file photo

The Austin Port Authority has proposed to enter a conditional purchase agreement with a Wisconsin firm to market the old Hy-Vee building and a piece of land on 18th Avenue Northwest for a restaurant and adjoining retail space.

The Austin Port Authority on Wednesday agreed to move forward with publication of the agreement and scheduled a public hearing, which will begin at 4:30 p.m. on Monday, July 1, in City Council chambers of City Hall, 500 Fourth Ave. NE.

Slaby and Associates of Verona, Wisconsin, according to the proposed agreement, would market the building and what is known as the Farmer’s Market lot for $800,000, the Port Authority will take possession of the building on July 10, as per its agreement with Hy-Vee.

As part of the proposed agreement, there will be an inspection and due diligence period that extends to the end of the year, during which time Slaby and Associates will have either successfully marketed the 52,000-square-foot building for tenants — which has to include an anchor store — or it will withdraw from the agreement.

The Port Authority would reserve a piece of land south of the building. It would pay the insurance on the building during the due diligence period.

The building at that point would still fall under a contractual requirement that says Hy-Vee must demolish the building. The company would have until Feb. 1, 2018, to complete the demolition. Should Slaby exercise purchase of the property, Hy-Vee would still contribute $200,000 toward the project’s proceeds, according to an amendment to an agreement with Hy-Vee.

The Farmer’s Market lot, located on 18th Avenue Northwest between O’Reilly Auto Parts and the Hy-Vee gas station, would have to include a “fast casual” or sit-down restaurant encompassing about 42,000 square feet, and a strip of retail space that has a total of about 7,000 square feet.

City Administrator Craig Clark, who is also executive director of the Port Authority, said in a memo to the Port Authority members, “it is our understanding from the Slaby representatives that the larger anchor retailers they have approached have their expansion decisions made in July and August and the proposed agreements provide ample time for other retailers to make a decision about opening in Austin within the subdivided building or in the outlot store front.”

Chamber of Commerce Executive Director Sandy Forstner spoke in favor of the agreement, noting that retailers in the area “are very supportive” of more retail in that area and not a return of the former store to green space.

City Council member Laura Helle, a representative to the Port Authority, said her conversations with retailers in the area were the same.

“All indicated their support of the city to bring in additional retail,” she said. “I don’t see a downside.”