Music! Glorious music! Community band gears up for another season 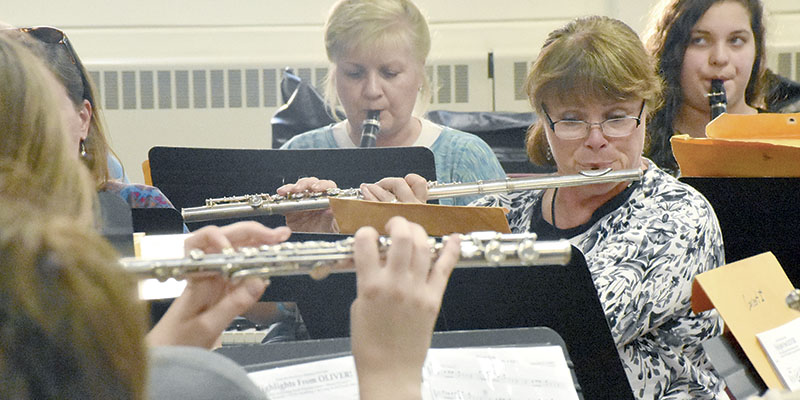 There are almost 50 musicians that return each year to perform with the Austin Community Band. Their next performance is Wednesday, June 21, at Bandshell Park. Photos by Deb Nicklay/deb.nicklay@austindailyherald.com

It is sweat-popping hot in the band room at Austin High School annex, but the community band musicians don’t seem to notice.

It is one night before their first concert of the season, held at the Bandshell Community Park in Austin.

As musicians launched into the first, shimmering notes of “Food, Glorious Food,” a portion of the overture from the musical “Oliver!” it was clear that the temperature was taking a back seat to tempo.

Director Brian Koser, his hair wet from the heat, arms aloft, took the members through their paces, encouraging and praising.

“It’s the people that really make this worthwhile,” he said during a break. “We have lots of support — and our people have a lot of enthusiasm.”

Indeed, this group might be something of an anomaly. While many community and municipal bands are in constant need of members, this group of almost 50 musicians has no trouble filling the instrumental ranks. 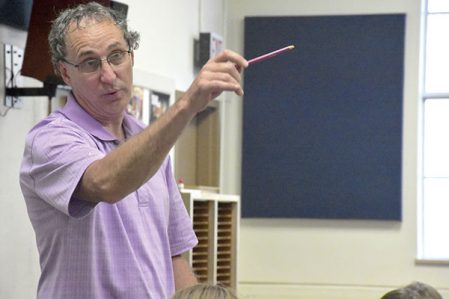 “You have to come back (every season),” said percussionist Martha Chancellor, who comes from St. Ansgar, Iowa, to be a part. “It’s just too much fun not to.”

The band features all ages, from tuba player Sam Bennett, who has been with the band since the eighth grade, to those like Roger Boughton, who is retired, who has played trumpet for many years.

“I just wanted something to do over the summer,” said Bennett, who is today 20 years-old and a student at the University of Minnesota. He said it is the only time he can indulge his love of performing music, since studies take up time the rest of the year. He began to play with the band when his brother, Luke, was also a member.

He added with a chuckle, “We say our pre-requisite to joining is that you haven’t played an instrument in five years.”

Fun is clearly at the top of the roster, including a diversity of selections. Although the band will play marches, their concerts always have new content. A “subset” of the band, a Community Jazz Band will also be featured this summer at a Historic Hormel Home concert.

“Well, sure,” said Koser. “It would be a drag if we played the same thing over and over. We try to do as much new stuff as we can.”

That ranges from classics, to Broadway, to movie themes and pop music. You might hear selections from “The Jungle Book,” a Henry Mancini piece, or “Seventy-six Trombones” from the “The Music Man.”

The band has been a mainstay of summer in Austin for many years, whose presence ebbed and flowed. Koser has been a steadying force, and has held the baton for almost two decades.

Koser applauds the support given by the Southeastern Minnesota Arts Council, the Austin Area Foundation, the Austin Public Schools and the city of Austin’s Parks and Recreation Department.

But his musicians take his biggest accolade.

“They are just so much fun to be around,” he said.