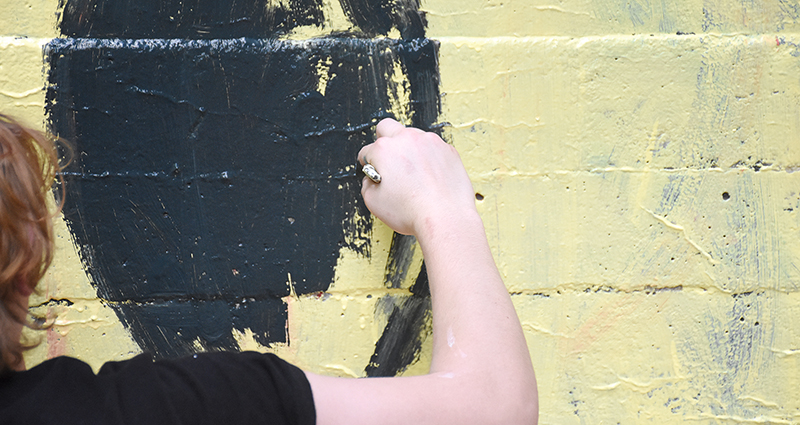 Students from the New Dominion School painted a mural under the railroad bridge along the bike trail near Dobbins Creek. Photos by Michael Stoll/mike.stoll@austindailyherald.com

Students from New Dominion School painted a mural on the bike path under the railroad bridge near Queen of Angels Catholic Church and Dobbins Creek on Tuesday.

With each stroke of their brushes, they beautified Austin, painting over an area that was once covered in graffiti from vandals.

They painted the mural as part of the Good Graffiti program. 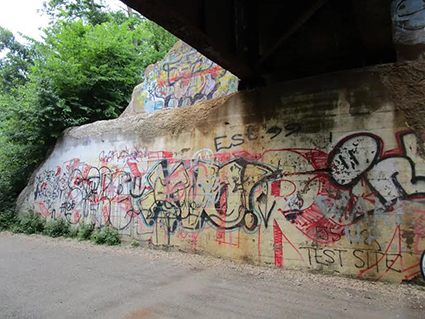 This picture shows what the graffiti looked like before students from the New Dominion School painted their good graffiti. Photo provided

“I bike a lot around the community and I noticed a lot of these areas that looked fairly ugly,” said Chris Oftelie, the art teacher at New Dominion School. “I was hoping that I could take the students out to do something that would be positive for the community and kind of brighten up some of those walls that didn’t look so nice.”

Started in 2013, the Good Graffiti program is an offshoot of the Vision 2020 Community Pride and Spirit Committee. The program encourages people to cover gang tags and acts of vandalism with positive messages and street art.

Geoff Smith of the Vision 2020 Community Pride and Spirit Committee says the cost of paint and materials is offset, thanks to a grant from the Austin Area Foundation. 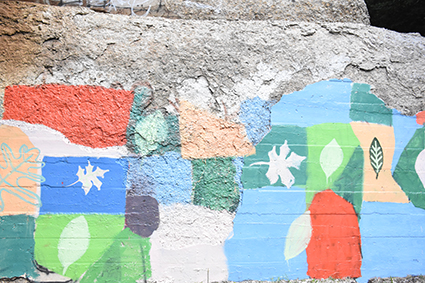 A look at some of the completed art.

Oftelie said the students also worked on a mural near Mill Pond by the Austin Utilities building.

“They feel like they’re doing the community a service,” he said about the students, who received compliments and appreciation from passersby for their work. “Just being part of something bigger like that motivates them and makes them inspired in knowing they can do something positive like that for our community.”

Students from New Dominion, the school at Gerard Academy, are not the only ones to get involved in the Good Graffiti program. Students from Pacelli Catholic School, the youth group from Our Saviors Lutheran Church, as well as artists from Austin and Rochester, have participated in the program. Austin Parks and Recreation, the Austin ArtWorks Center and Austin Utilities assist in making the process as easy as possible for citizens to cover the negative graffiti. 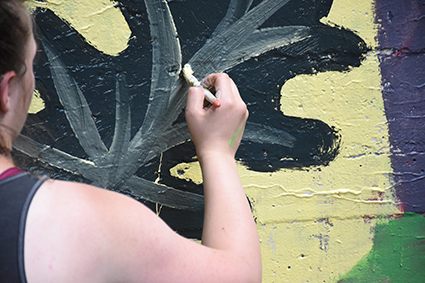 Student from the New Dominion School painting part of the mural.

For Tuesday’s New Dominion mural, the paint and brushes were provided by Habitat for Humanity.

Much of the work has been done around Mill Pond. Other spots include behind the Historic Paramount Theatre, Driesner Park and Roosevelt Bridge.

Smith believes the works have done much to beautify Austin.

“One of my favorite pieces is the ‘You Are Beautiful’ message painted on the Mill Pond fence not far from the library,” he said.

Oftelie is willing to continue working with the New Dominion students in covering graffiti around the city should the opportunity present itself.

“So far it’s worked great so I am really happy with what they’ve accomplished so far,” he said.

To get involved or for more information, contact Geoff Smith at gsmith@ibidata.com or stop by the Austin Parks and Recreation office for the necessary forms.