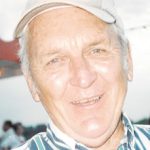 Mitchel was born July 2, 1932, to Cecil and Alice (Fellwock) Stethem in Fonda, Iowa. Mick grew up and attended school in Marathon, Iowa. He entered military service in the United States Navy in 1950 during the Korean Conflict. Following his honorable discharge in 1954, he returned to Minneapolis, Minnesota, and began a long career as a semi-truck driver. Mick was united in marriage to Carol Bostrack on May 2, 1959, in Storm Lake, Iowa. They resided in Minneapolis, where Mick worked many years for Hunt Trucking, and various other companies in Minneapolis and St. Paul, Minnesota, before retiring in 1996. In retirement, Mick volunteered his time at the VA Medical Center in Minneapolis. He and Carol enjoyed working estate sales and delivering meals on wheels. They especially enjoyed time spent at their hobby farm near Chatfield. He was a longtime member of Teamsters No. 120 in St. Paul and VFW Post No. 1216 in Austin.

Funeral services will be held at 2 p.m. on Tuesday, June 27, 2017, at Worlein Funeral Home Chapel with the Rev. Mark Niethammer officiating. Visitation will be held Tuesday afternoon from 1 to 2 p.m. prior to the service at the funeral home. Interment will be in Oakwood Cemetery with military honors by VFW Post 1216 of Austin.