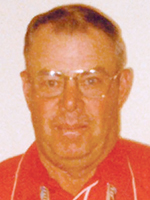 Melvin Bronstad, 89, of Spring Valley, Minnesota, died on Monday, May 29, 2017, at Ostrander Care and Rehab in Ostrander, Minnesota.

Melvin I. Bronstad was born Sept. 29, 1927, on a farm near Chetek, Wisconsin, son of Ingval and Julie Bronstad. Melvin was baptized in 2005 at Ostrander. He went to school until the eighth grade. Melvin went into the United States Army from 1942-1944. On July 21, 1950, Melvin married Lucille Hanson at the First Baptist Church in Albert Lea, Minnesota. He farmed most of his life. In 1978 Melvin quit milking and began to do something he loved, which was music. He started his own polka band, Mel’s Polka Stars. During this time he continued cash crop farming for a number of years. Melvin enjoyed dancing, playing old time music, fishing, traveling, telling jokes and making casino trips.

He was preceded in death by his parents; wife, Lucille; his siblings, Margaret Hoover, Carl Bronstad, and Raymond (Artie) Bronstad; mother and father-in-law, Mary and Chris Hanson; and brother-in-law, Donald Hanson.

Hindt Funeral Home was in charge of arrangements. Condolences may be left at www.Hindtfuneralhomes.com.