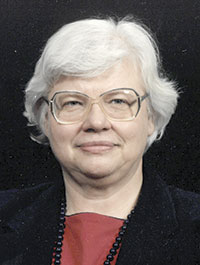 Mary Lou is survived by her brother, Marvin, of Centreville, Maryland; her godchildren, Mary, Kim Stursa Brown, and Joseph Rysavy; nieces and nephews, Amy, Kim, Jill, Alison, Brett, and Kelly; and several great-nieces and nephews.  She was preceded in death by her parents; her brother, Gary Stursa; and her special friend, Al Kording.

In lieu of flowers, memorials can be directed to St. Scholastica Mary Louise Stursa Educational Scholarship Fund, St. Mary’s School in Owatonna, or a recipient of the donor’s choice.