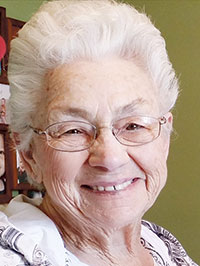 Margaret was born Aug. 5, 1927, in Janesville, Minnesota, to Hector and Mary Ellen (Goebel) Seys. They moved to Waterville, Minnesota, and farmed. They moved to Austin in 1942. Margaret graduated from Pacelli High School in 1945. She worked at Hormel, that is where she met Norbert Bergstrom and they married on April 16, 1947, at St. Augustine Catholic Church. They lived their married life on Rt. No. 4 or also known as “Old Plymouth Avenue.” Margaret was a homemaker and later worked at Comforcare Nursing home for several years. Maggie “B” loved her country home that Norb and she built 64 years ago. She loved gardening, canning pickles, baking, writing postcards and letters. Her family was her life. She always had coffee made and a sweet treat for all those that stopped by.

A funeral Mass will be celebrated at 10 a.m. on Monday, June 19, 2017, at St. Augustine Catholic Church with Father John Traufler officiating. Friends may call one hour before the service at the church on Monday. Interment will be in Calvary Cemetery.

Mayer Funeral Home is in charge of arrangements. Condolences may be left online at www.mayerfh.com