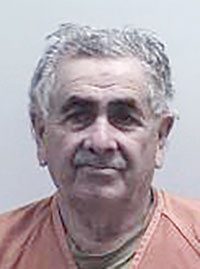 A man arrested for drugs as police were looking for the legs of a stolen and discarded trampoline last December will serve probation.

According to the Austin Police Department and court records, two officers were responding to the discarded trampoline found on a resident’s lawn around 5:30 a.m. on Dec. 3, 2016, in the area of the 1000 block of Fourth Street Northwest when an officer saw an older man ride by on a bike and stop on the sidewalk in front of a home on that block.

The officer watched the man, later identified as Rodriguez-Sanchez, approach the house and appear to ring the doorbell. The man walked from the doorstep down to a row of shrubs on the property line, bent down, moved some leaves and picked up a white, golf-ball sized item, which he then put back, covered with leaves and walked toward his bicycle.

Police then approached the man and questioned him, learning he did not live at the residence; however, he said he was going to talk to the property owner about a job raking leaves.

He denied putting anything in the grass.

However, police then found plastic bag containing 4.42 grams of methamphetamine hidden beneath leaves. Rodriguez-Sanchez continued to deny putting the drugs there, even after an officer told him he’d witnessed him placing it there.

Police also seized $160.83 that was on Rodriguez-Sanchez.

Police were, however, unable to find any suspects for the stolen and discarded trampoline, and they were initially unable to find an owner. Police briefly took it for storage, but the owner called later and it was returned.