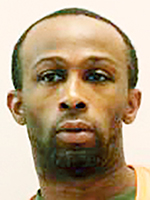 A 37-year-old Austin man is facing additional charges after allegedly shoving a probation agent and two other people before fleeing the Mower County Jail and Justice Center after alcohol was detected in his system during a probation check-in.

According to court records, Robinson was at the Justice Center around 7:30 a.m. on May 30 for a probation check-in when a Mower County Correctional Services agent told him that his Breathalyzer test came back with a 0.05 percent alcohol concentration.

Robinson claimed he’d used mouthwash, and allegedly became loud enough that the probation agent had to close his door.

After being told he’d need to be taken into custody for using alcohol, Robinson shoved the agent against the wall and fled, running and pushing two other people on probation in the hallway.

He fled the justice center while being pursued by officers, continuing to run after an officer ordered him to stop.

Officers apprehended him a few blocks away, but they had to use a chemical irritant, which had no effect, after he kicked an officer in the groin while being placed in a squad car.

He was booked in jail, where he had a 0.034 percent alcohol concentration.

Robinson was convicted of domestic assault in 2015, and he is awaiting trial for three felonies — domestic assault, terroristic threats and malicious punishment of a child — for an April 23 incident.