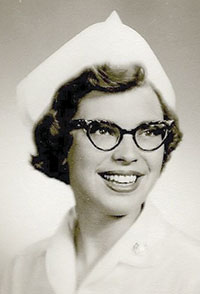 Lois Jean Weber, 79, of Lake City, Minnesota, formerly of Austin, Minnesota, passed away on Thursday, June 8, 2017, at the Lake City Care Center under the care of hospice with family at her side.

Lois was born on April 16, 1938, and raised on the family farm near Austin. She graduated from Pacelli High School in 1956 and St. Mary’s School of Nursing in Rochester, Minnesota, in 1959. After graduation, she worked as a surgical registered nurse at St. Marys Hospital in Rochester.

Lois married Kenneth Weber of Lake City on July 8, 1961, at Queen of Angels Church in Austin. She continued her nursing career in Lake City as a ward and surgical nurse for 17 years and another 15 years as a surgical nurse at St. John’s Hospital in Red Wing, Minnesota. Lois retired from nursing in 1997. She greatly enjoyed reading, watching wildlife and birds (especially hummingbirds), camping, and family get togethers.

Lois is survived by her husband, Ken Weber of Lake City; children, Kevin Weber (Lexine) of Lodi, Wisconsin,  Joan Steffenhagen (Mark) of Evansville, Indiana, and Diane Nelson (Scott) of Abbotsford, Wisconsin; grandchildren, Amanda and Elizabeth Weber of Lodi, Nicholas Weber of the U.S. Air Force, Jacob Steffenhagen of Evansville, and Sara and Craig Nelson of Abbotsford; and her two four-legged fur balls, Sally and Oscar, who she loved dearly. She is further survived by sister-in-law Lorraine Heitmann of Lake City and a niece, nephew, and cousins.

Lois was preceded in death by her parents, Fred and Anne Gravenish; brother-in-law, Kenneth Heitmann; and other family.

Continuing her love of medicine, Lois donated her body to Mayo Clinic Department of Anatomy. A celebration of Lois’s life will take place at a later date. Memorials may be directed to Pacelli High School in Austin, Lake City Friends of the Library or a charity of the donor’s choice.

Lois’s family would like to thank the Lake City Care Center Staff and Mayo Hospice Red Wing for their compassionate care of Lois.