Becker, the featured speaker at Pacelli Catholic High School’s commencement on Wednesday night, said that while the last year of her son’s life brought with it some of her life’s worst moments, it also brought some of her best.

She used her story to bring a message to the 14 graduating seniors, who got their diplomas at St. Augustine Catholic Church.

Her advice to the graduates, who will all face adversity in some form, she said, was to not look at yourself as a victim, keep emotions in check, and be grateful for what you have.

“Joy came to us, through the pain and difficult times,” Becker said. “We would have missed the last year with Drew” if she and her family felt they were victims of tragedy.

Instead, Heidi and her family worked to lock away their grief and spend as many moments as they could, creating memories with their son and brother.

Becker said while she was in the hospital with Drew, “I would wake up tired, but I drank lots of coffee and we would head down the hall to the playroom” — and create more precious memories.

She said being thankful for the good things makes you feel better.

“It shifts our focus … to the generosity and caring of God,” she said. 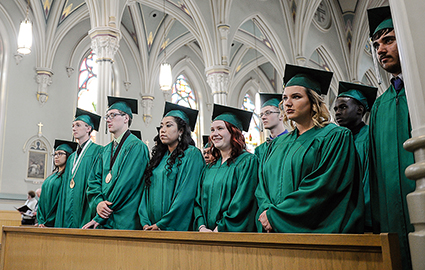 Both student speakers also acknowledged that the best lessons often come through having survived adversity, the sting of bad days, or making mistakes.

“Look at that inventory of lessons,” urged valedictorian Neftali Lopez, “and take them to better yourself.”

“No one but you can stop you,” said salutatorian Nathan Dreese.

Principal Laura Marreel said she had a special love of the class, who were active and challenging 12-year-olds when she came to teach at Pacelli.

“They were the island of misfit toys,” she said, drawing a laugh.

One of them even stood up during one particularly trying day in her class, and said, “Ms Marreel, we are your least favorite class, aren’t we?”

The statement stunned her, making her realize that “No child of God should ever feel they were not liked.”

She said she found she learned a lesson from the “misfits”: “They taught me to look for the good in people.”

Today, they are also strong, spirited, concerned with making the world a better place, and “they are filled with joy,” Marreel said.

They are also students of faith, scholarship and service, who care for each other, said President Jean McDermott during her welcome.

“Your education has not only nourished your mind, but your spirit,” she said. “When all else fades away … you can say ‘We loved each other.’ “ 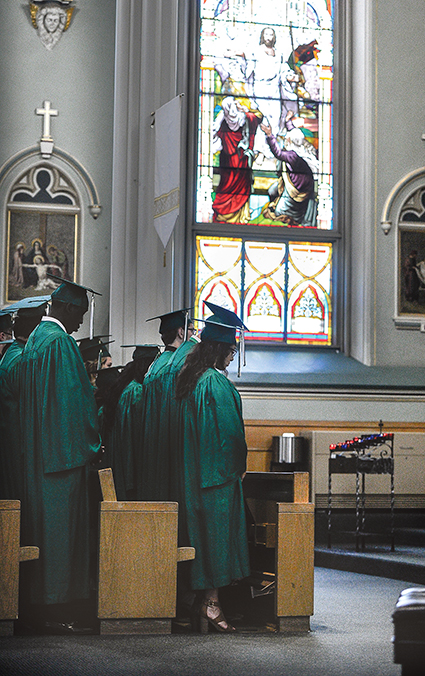 Graduates bow their heads in prayer at the start of the Pacelli 2017 commencement Wednesday night.