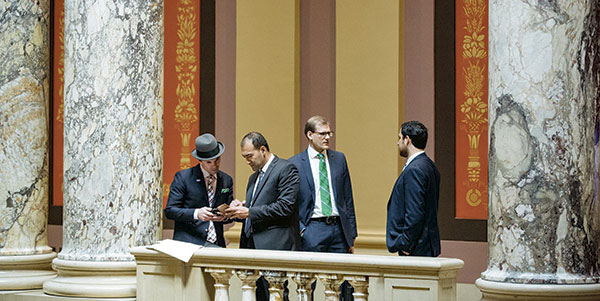 A group of lobbyists and state employees hang out on the second floor of the Minnesota State Capitol during the last day of the 2017 legislative session. Evan Frost/MPR News file

Privately, the worry among legislative staff members — and even some legislators — is setting in.

Some say they’re putting off planned summer vacations or home-repair projects. That’s because they don’t know how long their paychecks will keep coming.

In a little more than two weeks, the spigot on funding for the House and Senate is due to be shut off, pending a court order or negotiated resolution to a budget standoff with Gov. Mark Dayton.

The Republican-controlled Legislature filed a lawsuit against Dayton Tuesday in Ramsey Country District Court, contending that the governor’s line item veto of $130 million in funding for the House and Senate is unconstitutional and should be reversed. The lawsuit asks for a resolution by July 1, when the new fiscal year begins.

The Legislature has limited reserves to get by for a bit.

It would be business as usual in the House for at least two months, said House Speaker Kurt Daudt, R-Zimmerman. “Then we’d start to wind things down. The problem becomes the Senate will run out of money before the House will.”

Read between the lines, and he’s hinting at layoffs if the dispute drags on.

“This isn’t just a political game that just might affect a few politicians,” he said. “This affects our employees and their families, and ultimately could affect all Minnesotans.”

The House has about 230 full-time staff plus others who come aboard during the legislative sessions. That’s on top of the 134 elected members.

The Senate employs 205 full-time staff along with its 67 members.

Combined, their operating expenses are $5.2 million per month, mostly in payroll costs.

“I don’t want people to be overly anxious and don’t think there is a reason to be,” Bakk said this week. “I do believe this will be resolved.”

“I regret the impact on staff, very much,” he said. “I went through watching thousands of very dedicated state employees up against the brink of a shutdown and then the actual shutdown in 2011.”

His aides note that similar problems would have been thrust upon executive branch employees under a legislative maneuver. A bill appropriating operating money for the Department of Revenue tied that money to Dayton’s approval of a tax-cut package, which he said tied his hands.

But the DFL governor, who said he vetoed the House and Senate’s funding over how the tax bill and some other measures were crafted, said the fight doesn’t have to be a prolonged one. He said he would call a special session to restore funding if leaders revisit the tax bill.

Republican leaders note that Dayton signed all of the budget bills and shouldn’t ask to renegotiate them after the fact.

They argue Dayton exceeded his power by striking down the funding for a separate branch of government. The governor contends his line-item veto power is clearly spelled out in the constitution.

It’s now up to the courts to sort that out.

But the Senate has another concern — the building where the institution has its offices. It comes at a monthly cost of $683,000, which goes into an account to pay construction bonds off. The Senate’s next payment into the fund is due on June 30.

But the state won’t have to make another payment to the bank that holds the building bonds until December, when about $2 million is due.

Administration officials have previously informed lawmakers that withholding building payments could result in default on the debt.

Default could prompt investor lawsuits and a downgrade of Minnesota’s sterling credit rating, which in turn would make it more expensive to borrow for public construction projects.

The Department of Minnesota Management and Budget doesn’t appear to have latitude to unilaterally dip into other accounts. State documents from 2014 related to the building financing lays out risks, but not like the one at hand.

“There can be no assurance that other events outside the control of MMB, such as a temporary state government shutdown, will not affect the ability of MMB to make timely payments of principal and interest on the certificates,” the documents say.

Senate Majority Leader Paul Gazelka, R-Nisswa, said he told Dayton what he’ll choose if it comes down to paying the rent or paying staff.

“I just wanted the governor to know that my people are more important than the building,” Gazelka said. “From there, we’ll just have to decide how it is. But we’re going to prioritize people first.

“Whether they evict us or not, I don’t know. That is an issue we have to explore. But we’re not going to jeopardize our staff over that building.”