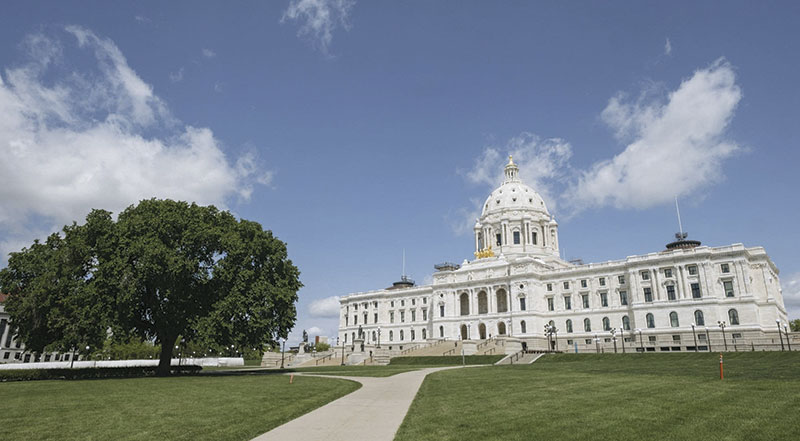 With no one giving, court may be inevitable

ST. PAUL — Neither side in the latest standoff between the legislative and executive branches appears ready to blink, so a court case looks inevitable.

And while Republicans who control the House and Senate say Dayton’s action to cut their funding is clearly unconstitutional, there is ambiguity in just how far his legal power stretches to veto spending.

Dayton is insisting lawmakers revisit a series of tax breaks and changes to teacher licensure and drivers’ license regulations as conditions of calling the Legislature back into special session. He’s invited top lawmakers in to talk about it.

Those lawmakers say they’ll listen, but as Senate Majority Leader Paul Gazelka, R-Nisswa puts it, they’re not about to crack the just-approved budget back open.

“We’re drawing a line. We’re not going to keep renegotiating things that we all agreed to.”

With a little more than three weeks until the new fiscal year begins, a lawsuit could wind up on the fast track. House Speaker Kurt Daudt, R-Zimmerman, says it should be an easy win for the Legislature.

Two clauses in the state constitution are most relevant.

One lays out the three distinct branches of government followed by these words: “No person or persons belonging to or constituting one of these departments shall exercise any of the powers properly belonging to either of the others except in the instances expressly provided in this constitution.”

Scroll down and you find this about a governor’s veto power: “If a bill presented to the governor contains several items of appropriation of money, he may veto one or more of the items while approving the bill.” Which wins out?

“Really, this is an extreme circumstance,” said University of St. Thomas law professor Michael Paulsen, who is a scholar of constitutional law.

“It’s the governor’s power to call the Legislature into special session,” he said. “But he’s essentially trying to point an unconstitutional gun at their heads by saying if you don’t do it my way I will use my line-item vetoes to shut you off entirely.”

It might not be so clear cut, said retired State Supreme Court Justice Paul Anderson.

“As much as you like to talk about separation of powers, it’s not always clear where one branch’s power ends and another’s begins,” he said.

When speaking to students, Anderson said he likes to show a pie chart with each of the three branches with stark lines in between each. Then he shows another with fuzzy delineation: “It’s not absolutely clear what happens when there is some overlap.”

The Legislature has some money in reserve to help it limp through for a bit after July 1 if the matter is unresolved by then.

But the Senate could run through its $4 million in available funds in about six weeks or less because of lawmaker and staff salaries, building rent and basic operating costs.

The House has a slightly bigger cushion but would need an infusion before long.

The Legislature has hired an outside law firm that is expected to charge $325 per hour to pursue the case. That’s why Daudt is hoping for a swift resolution.

“The more we spend on lawsuits, the less time we can operate the House and Senate if it stands that the funding is eliminated.”