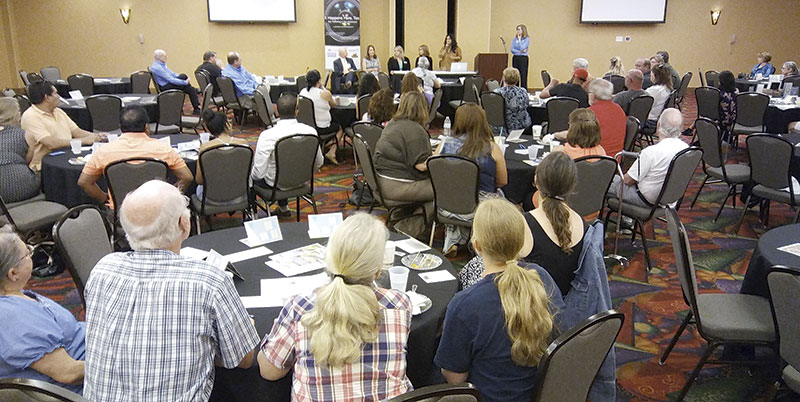 KSMQ Public Television aired its recent documentary, “It Happens Here, Too,” at the Austin Holiday Inn Thursday evening.  People from Austin, Rochester and Albert Lea came to watch the documentary, which focuses on regional sex trafficking.

“The idea came about when we were first tipped off about Kelly Nesvold’s 300M4Freedom triathlon,” said KSMQ Managing Editor Stephanie Passingham, referring to Austin’s Dr. Kelly Nesvold, who organized the triathlon to bring awareness to victims of sex trafficking in 2016. “In doing interviews for that, we decided we needed to do more for this story.”

Passingham said the resulting documentary was well received by the audience at the Holiday Inn.

“We put out comment cards, and it was clear from the comments that people wanted to know more,” she said.

After the documentary aired, a discussion panel was held, with questions ranging from penalties for johns, to youth awareness, to housing for victims that have escaped.

Passingham said the documentary is appropriate for kids old enough to understand what sex trafficking is.

“[Thursday] night, people discussed using the documentary as a conversation starter to talk to kids,” she said. “KSMQ wanted to use it as a means to educate younger people.”

“We want to generate this discussion and bring awareness to this issue,” she added.