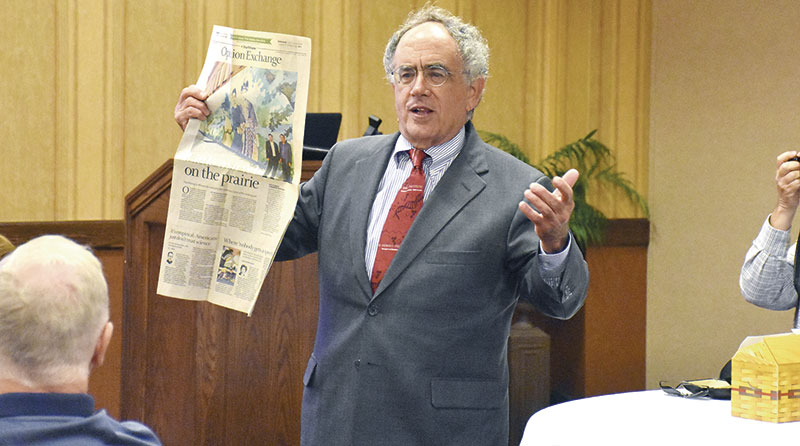 William Blazar holds up an article about an immigrant owned business during a talk on “The Necessity of Immigration Reform” Wednesday. Michael Stoll/mike.stoll@austindailyherald.com

William Blazar, Senior Vice President for Public Affairs and Business Development, Minnesota Chamber of Commerce, presented “The Necessity of Immigration Reform” during a luncheon at the Hormel Historic Home on Wednesday.

The discussion, organized by the Austin Chamber of Commerce, focused on the state economic impact of immigrants in Minnesota.

“Immigrants are key to economic success in Minnesota,” Blazar told the crowd of Austin business, civic, and institutional representatives.

According to Blazar, the University of Minnesota conducted a study over the past decade about the role of immigrants in the state economy. The study focused on four major aspects: workforce, entrepreneurs, consumers, and connection to the world economy.

The study found that more people leave Minnesota than migrate to Minnesota.

“When I talk to businesses, they always tell me they need workers,” Blazar said. “It’s a statewide problem.”

The study showed that six percent of Minnesota businesses are immigrant-owned. Those businesses employ approximately 60,000 people in Minnesota. 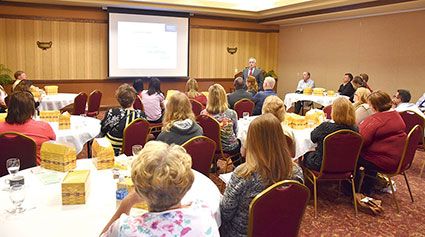 William Blazar presented “The Necessity of Immigration Reform” during a luncheon at the Hormel Historic Home on Wednesday. Michael Stoll/mike.stoll@austindailyherald.com

“I think it is a misnomer to think of immigrants as the people taking care of your parents or putting the roof on your house,” Blazar said. “In my experience, I’ve seen them contribute at every level.”

According to the study, the presence of immigrants makes foreign companies more comfortable investing in Minnesota.

“This is becoming more and more a world economy and Minnesota needs to be part of that economy,” Blazar said, citing examples like Mexican-owned Faribault Foods, Brazilian-owned Gerdau in St. Paul and Chilean-owned Twin Metals in Biwabik.

The Minnesota Chamber of Commerce proposed the following solutions for immigration reform:

•Respond to economic changes with action, such as replacing fixed quotas with dynamic systems

“The immigrants want to be here and they want to do well,” Blazar said.