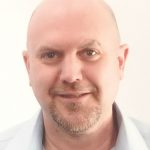 John was born March 28, 1961, in Austin, Minnesota, to Edward and Elizabeth Louden. He graduated from Austin Public High School, Austin Area Vocational-Technical Institute, and attended the University of Minnesota. Following college, he served in the U.S. Navy aboard the USS O’Brien. For the past 29 years John was employed with the United States Postal Service. On Feb. 14, 2004,  John and Mei were married in Stillwater, Minnesota. John and Mei were blessed with the birth of their son, Derek, in 2005. His hobbies included international travel, running marathons, and singing karaoke. John was born with a heart of gold and was always willing to help others unconditionally. He will be missed by all.