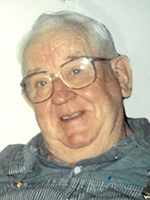 He was born July 26, 1921, in rural Dodge County, Minnesota, to Ivar and Pauline (Madson) Hove. Ingval lived in the Hayfield area and attended school in Dodge County. He enlisted in the U.S. Marine Corps in 1943 and served his country until his honorary discharge in 1945, then went to work for Lysne Construction. On Oct. 28, 1947, Ingval was united in marriage to Lorraine Haberman at the First Lutheran Church parsonage in Blooming Prairie. Their union was blessed with one daughter. Upon moving to Blooming Prairie in 1948, Ingval worked for the Blooming Prairie Co-op Creamery hauling milk, and as an over-the-road truck driver for Madsen Truck Lines out of Albert Lea until 1982. In his retirement years, he did mowing for the city of Blooming Prairie. The Hoves belonged to First Lutheran Church and Ingval was a member of the American Legion Post 52. Ingval enjoyed traveling, taking road trips, and visiting over coffee. He will be dearly missed by his family and friends.

Survivors include his daughter, Beverly (Roger) Wessels of Albert Lea, Minnesota; four grandchildren, Debbie (Rockland) Bolhuis, David Bolhuis, Jay Wessels, and Christopher Wessels; four great-grandchildren, Nicole, Dylan, Gemma and Jacey; his sister Marie (Gerald) Jacobsen of Owatonna, Minnesota; and nieces, nephews, and cousins. Ingval was preceded in death by his parents; his wife of over 60 years, Lorraine Hove; and one brother in infancy.

Funeral services will be held at 11 a.m. on Friday, June 30, 2017, at First Lutheran Church in Blooming Prairie with Pastor Jeff Sandgren officiating. Visitation will be one hour prior to the service at the church. Interment will be in First Lutheran Cemetery with military honors by American Legion Post 52 and VFW Post 878. Memorials can be directed to the American Lung Association, the American Heart Association, or recipient of donor’s choice. Services prearranged and performed by Worlein Blooming Prairie Funeral Home.  Condolences may be expressed to the family online at www.worlein.com.