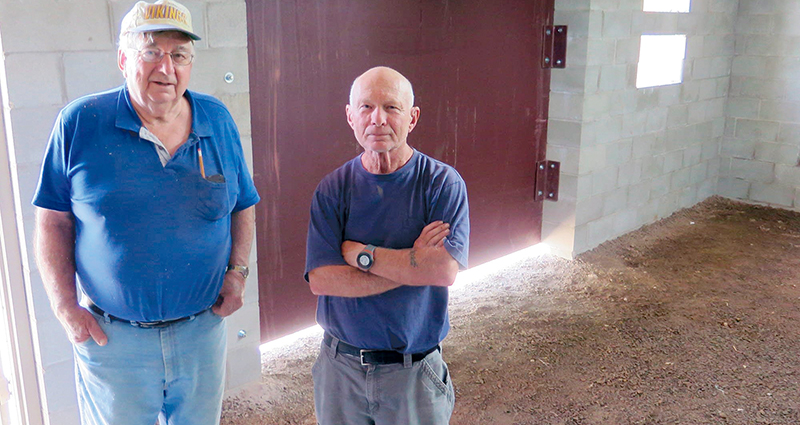 Jim Maggi drives a golf cart from his house in a Pine City mobile home park north of the Twin Cities to the nearly complete storm shelter dug into a small hill about 100 yards away. Maggi estimates it’s about 20 by 35 feet, with windows for ventilation and a gravel floor.

A 70-year-old Vietnam veteran retired from the construction industry, Maggi said getting his landlord to build this shelter was a difficult, protracted process. It involved forming a homeowner’s association and spending three years writing letters to public officials.

“It shouldn’t be this way. We shouldn’t have this kind of adversarial relationship,” Maggi said. “This shelter was supposed to have been built 17 years ago, and for us to have to fight for that long, three years, that’s crazy. The state should have intervened and said you’ve got to have a shelter.”

When tornadoes threaten, the safest place is a basement, or an interior room far from windows. For those who live in mobile homes, that’s generally not an option. Minnesota law requires most mobile home parks to have storm shelters, but it’s often up to tenants to make sure their landlords follow that law.

Residents often have to make a concerted effort to secure adequate shelters — something David Anderson of All Parks Alliance for Change, a tenant advocacy group, said many don’t have the time or resources to undertake.

“You have people who are among the lowest income households in the state who are made responsible for enforcing the laws that are designed to protect them,” Anderson said.

Sunrise Estates appears to be following the letter of that law. It’s a mix of older, corrugated-metal trailer homes alongside brand new factory-built modular houses with vinyl siding and ample porches in Stacy, Minn. On opposite ends of Sunrise Estates are two identical low-slung, windowless buildings.

Inside one, maintenance man Rudy Hernandez flips a switch to open a large motorized roof vent to draw in fresh air for the several hundred residents who may need to wait out a storm here someday. Bolted to the top of the building’s thick cement block walls is a ceiling made of pre-cast concrete tubes strengthened with steel.

“You can have a tornado come through here, tear up everything around it, and this will all still be intact,” Hernandez said. “It’s not just a little piece of plywood that most homes would have on top, it’s almost a foot of concrete reinforcement up there.”

Minnesota has mandated buildings like this for almost three decades, and it appears to be alone among the states in doing so. Manufactured home parks with at least 10 homes built after 1988 must have shelters. Older developments need at least an evacuation plan to an offsite shelter.

The Minnesota Department of Health licenses approximately half the state’s 900-plus mobile home parks. Cities and counties oversee the others. Local governments have to sign off on shelter and evacuation plans for all parks.

Pine City park owner Bill Woischke said he has always complied with the law. Before building the new shelter at the park where Jim Maggi lives, Pokegama Township allowed Woischke to use a nearby supper club, the Floppy Crappie, as a place of refuge for residents.

“They don’t know quite what they’re talking about when they say I never did anything. It’s perfectly acceptable,” Woischke said. “The township’s the one that really makes the call and they had no problem with it all these years.”

Woischke said other unrelated disputes with township supervisors led them to withdraw approval of the arrangement. Maggi maintains the fact that the Floppy Crappie has floor-to-ceiling windows overlooking Lake Pokegama was one reason the restaurant could not serve as a shelter.

Wendy Spanier with the state health department said a possible sale of the park at one point and the Department of Labor and Industry’s rejection of an earlier shelter design slowed the process.

“We wanted to make sure everything was built according to the regulations so it was truly a safe shelter,” Spanier said.

In the last five years Minnesota Department of Health has issued fines of several thousand dollars against seven parks for not having storm shelters.