High cost for a higher wage?; Minneapolis businesses worry $15 wage will cost them 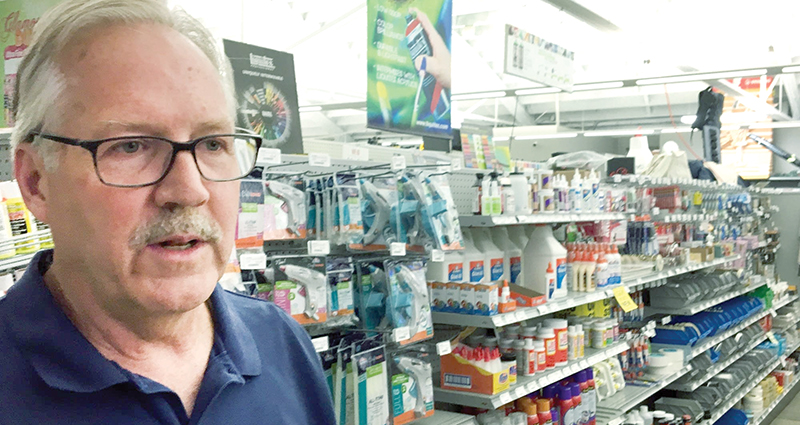 Larry Brown, co-owner of Art Materials in south Minneapolis, thinks the proposed $15 per hour minimum wage will be bad for workers because it will force employers to make some hard decisions. Brandt Williams/MPR News

Minneapolis — Larry Brown’s art supply store has a sizeable inventory and a large enough local following that he can fight it out with Michael’s, Hobby Lobby and online giants like Amazon.

Lately, though, Brown’s eyeing a threat to his south Minneapolis business that has more to do with politics than competition. The Minneapolis City Council is weighing an ordinance that would require city businesses to pay employees a minimum wage of $15 an hour. Council members will hear public testimony on the plan Thursday and are expected to vote next week.

Supporters say a higher wage will especially benefit low-income and people of color. Some critics, though, warn the ordinance will be bad for workers because it will force employers to make some hard decisions.

Brown and his wife and business partner JoAnn say the wage hike will force them to make changes they don’t want to make to their business, Art Materials on Lyndale Avenue. Their competition outside the city’s borders won’t be subject to the same law, so they won’t be able to raise prices in the store to compensate for the higher labor costs, JoAnn said.

The store has fewer than 20 employees. Many are part-time. The Browns say they already pay their employees well above the current minimum wage of $9.50 an hour.

The Browns say they’re not against people being able to earn a living wage but are already feeling the pinch from higher property taxes and are preparing for the implementation of the city’s earned sick time ordinance which goes into effect this summer.

If passed, the $15 an hour wage will be phased in over five years. For some, that wage can’t be implemented fast enough.

“If we want to talk about concrete policy that will address the equity gaps in this city, $15 minimum wage is right on,” said Celeste Robinson with the group 15 Now. A study commissioned by the city found that women, Hispanic and African-American workers will benefit disproportionately from this higher wage, she added.

Another group, though, Pathway to $15, argues there should be an exception when it comes to people who receive tips as part of their income. They want tips to count toward the minimum wage.

At a rally at the Hennepin County Government plaza last month, Heather Bray, owner of a neighborhood cafe called The Lowbrow, voiced her opposition to the city’s proposal.

“We’ve done the math and the minimum wage increase would account for more than the amount we’re profitable,” she said. “The only way to stay in business would be to significantly raise our prices.”

To keep prices steady, Bray said she could also eliminate tipping in the restaurant. But it’s something she doesn’t want to do.

Most of the 100-plus restaurants surveyed recently by Pathway to $15 said that without an exception for tipped workers, they would be forced to make drastic changes, like raise menu prices, reduce staffing or implement a service charge which would replace tips.

City Council member Lisa Bender supports the minimum wage ordinance but does not support an exception for tipped workers. Data show that most tipped employees will benefit from the higher minimum wage, she said.

A 2016 report from the Bureau of Labor Statistics shows the median hourly wage for servers in the region, which includes St. Paul and Bloomington, is just under $11 per hour.

“Look, I get the perspective of the business owner who says why is the government interfering in my business? I get that,” said Bender, whose south Minneapolis ward includes a thriving restaurant and bar scene as well as other commercial businesses. “But the reason we are is because our job is to govern for the greater good.”