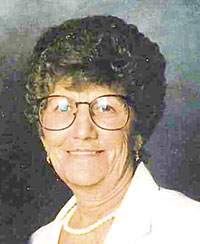 Helen Marie Sershen, 87, of Orono, Minnesota, formerly of Austin, Minnesota, passed away on Saturday May 27, 2017, at Waconia Hospital surrounded by the love of her family.

Helen lived in Austin most of her life and graduated from Pacelli Catholic High School. She worked at Hormel Foods for many years.

She moved to the Trails of Orono in the last 20 months to be closer to her family.

A funeral Mass will be celebrated at 11 a.m. on Friday June 9, 2017, at Queen of Angels Catholic Church with Father Raul Silva officiating. There will be a 4:30 p.m. CCW rosary on Thursday at Mayer Funeral Home where friends may call from  5 to 7 p.m.; and one hour prior to the service on Friday.