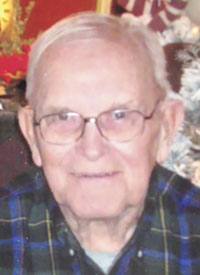 Harold was born on June 1, 1926, in Mason City, Iowa, to Gerald and Dorothy (Baker) Trimble. He attended school in Austin and after serving in the U.S. Army for two years during World War II, he returned to Austin High School and graduated in 1947. He married Darlene Baldner on July 9, 1948.

He was a co-founder of Trimble’s Cycle Center and also worked at Hormel Foods for 40 years. Harold was a member of St. John’s Lutheran Church, the Moose Club, the VFW, and the American Legion.

Harold was a trains, planes, and automobiles aficionado. Harold enjoyed softball, bowling, football, and any sort of sport. He played softball for the Moose and won a state championship in 1958. He loved bowling so much he put a full-length bowling alley in their home. Track was another of his favorite sports and he was told by his sergeant in the Army that he ran like Glen Cunningham (world record holder in 1934).

He was preceded in death by his parents; brothers, Richard and David; and sister, Charlene.