Half-cent tax discussion will return to county board 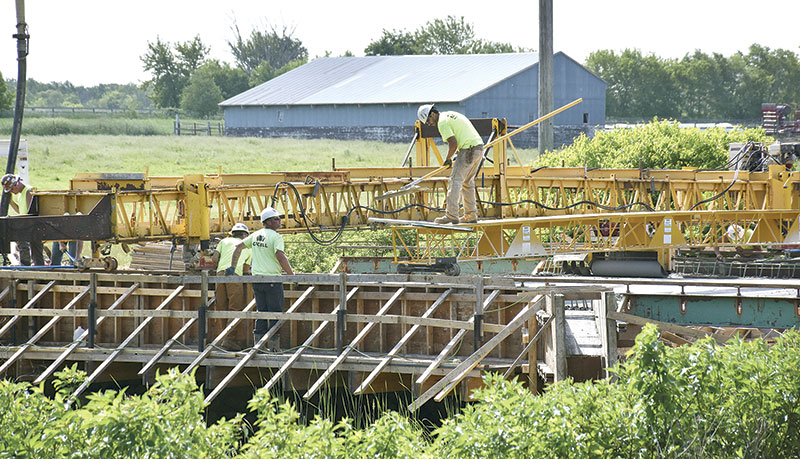 Crews work to replace a bridge Thursday at 29th Avenue Southeast. As construction season gets into full swing, the county board is set to resume discussions later this month on a half-cent sales tax for road and bridge projects. Jason Schoonover/jason.schoonover@austindailyherald.com

The Mower County Board of Commissioners on Tuesday agreed to revisit its proposed half-cent local option sales tax resolution that is scheduled to fuel another $1.5 million a year into fixing county roads and bridges starting next year.

Commissioners will take up the discussion at 10 a.m. on June 27 with the possibility of taking action on July 11.

The board has struggled with finding ways to pay for road and bridge needs. Last year, the board passed a resolution saying the tax would be levied starting start Jan. 1, 2018, but also said it would revisit the issue on Aug. 1 of this year to evaluate state funding after the legislative session had ended. The thought at that time was if the legislature could ante up a significant increase, the county’s approval of the tax could be rescinded.

While the state did come through with some additional transportation funding — some $230,000 — only 60 percent of that amount, by law, can be used for road construction, with the balance to be used for maintenance. That amounts to $135,000 a year in new money.

By comparison, a proposed resurfacing of a two-mile stretch of County Road 25 alone was estimated to cost over $650,000 this year, according to a project list and estimates prepared by Public Works Director Mike Hanson a year ago.

The county on Tuesday opted to open the discussion early since, as County Coordinator Craig Oscarson characterized it, the new funding was “bread crumbs, when what we needed was a full loaf.”

The county receives about $3.5 million in gas tax funding and $350,000 in wheelage tax. Lack of sales tax revenue would leave the county short over $6 million a year, based on the 2016 figures supplied to Hanson. The county will review updated figures when he supplies them in a few weeks. Any changes to the wheelage tax — paid at the time of driver license renewal — could be raised to as much as $20. The county has not discussed that option at any length, but if commissioners make a change, it must be done by Aug. 1.

The needs are based on a 10-year plan for some 40 projects targeted by Hanson, who estimated costs for the projects in that period at about $100 million.

The county’s proposal a year ago did not initially meet with unanimous support of its members. The first proposal was to initiate the tax at the beginning of this year, but it did not pass. While members Polly Glynn and Tim Gabrielson were in favor, Tony Bennett, Jerry Reinartz and Mike Ankeny were not. When another proposal was made to wait another year, the resolution was accepted unanimously and was considered a good compromise.

The Austin Chamber of Commerce also weighed in on the issue, saying members did not support the tax, believing it would hurt business and drive customers to shop out of the county.

Oscarson said the county oversees most of the 400 bridges located in Mower County, including the city of Austin.

County residents now pay a 7.37 cent sales tax; of that, 6.875 cents is a state sales tax and the remaining half-cent is levied by the city. Voters in 2006 approved the city tax to help fund $14 million in flood mitigation projects. The bonds will be paid in 20 years, or as soon as the $14 million level is met in projects.

All counties surrounding Mower County have at least a half-cent sales or transit sales tax in force, which in the past has prompted fears that Mower County’s roads could fall behind its neighbors.