A selfie of a man holding a gun to possibly make threats toward police has led to a prison sentence.

Jordan Scott Hoffmann of St. Cloud — formerly of Rochester — was sentenced Thursday in Mower County District Court to five years in prison with credit for 227 days served for being a violent felon in possession of a firearm, a felony.

According to court records, the Olmsted County Sheriff’s Office Warrants Division received information on On May 12, 2016, that Hoffmann, a wanted felon, was in possession of a firearm and was making threats toward law enforcement. They also received a photo of Hoffmann holding what appeared to be an assault rifle. 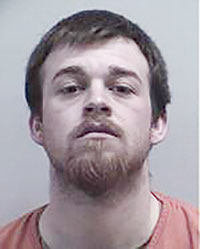 They later learned he was hiding with his girlfriend in LeRoy at his father’s house.

At about 10:15 a.m. on May 16, 2016, Olmsted and Mower County Sheriff’s officers arranged to meet at the home and arrest Hoffmann. No one immediately answered the door when they knocked, but they heard people moving around inside the residence.

Deputies saw a 9 mm shell casing on top of a garbage can next to the front door. After about 15 minutes, they saw Hoffman’s father through a window and called for him to come to the door.

The father answered the door and eventually confirmed Hoffman was inside. He led them to an upstairs bedroom, where Hoffman was hiding behind the door. He was arrested.

Hoffman denied having any firearms in the home and denied ownership or possession of any firearms.

Officers asked the father about the shell casing by the front door, and he said he has a 9 mm assault rifle on a shelf in his bedroom with 11 live rounds in the extended magazine. Officers identified it as the firearm in the photo with Hoffmann.

The father and Hoffman’s girlfriend said the gun never left the house and denied photographing Hoffmann with the weapon. Officers determined the photo was likely a selfie and appeared to have been taken in the home’s kitchen.

The firearm was seized as evidence.

Hoffman was convicted of second-degree burglary from 2011. On Jan. 26, 2017, Hoffman was sentenced in Olmsted County District Court to a stayed 54-month prison term, meaning he’d serve 20 years of probation as long as he followed 21 conditions, for felony third-degree drug sales from a March 2016 case.

However, the prison sentence was enacted in March, and he reported to prison on March 9.