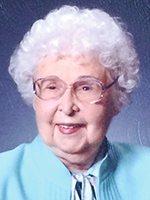 Eunice was born Nov. 22, 1916, to Carl Edwin and Nellie Charlotte (Peterson) Easton in Freeborn County near Blooming Prairie, Minnesota. Eunice graduated from Blooming Prairie High School at the age of 16, skipping two grades in school. She went on to attend Business College in Mankato, Minnesota. Eunice married DeLos Harris on May 5, 1945, at the Little Brown Church in Nashua, Iowa. DeLos finished his service duty in California and then they moved back to Minnesota. Eunice worked as a secretary at Wilson and Company in Albert Lea, Minnesota, the Veteran Service Office and the Norwest (US Bank) in Austin. Eunice’s hobbies were cooking, gardening, genealogy and quilting. She published three genealogy books. In May 2000, she traveled to Norway. She saw the three farms her grandparents had been born on and met family. Eunice moved to be closer to her daughter and family in Michigan at Christmas 2011. Eunice was still a formidable opponent in checkers with her oldest great-grandson, Dirk, well into her upper 90s and enjoyed tea parties with her oldest granddaughter, Danica.

A memorial service will be held at 10:30 a.m. on Saturday June 24, 2017, at Our Savior’s Lutheran Church with Pastor Karen Behling officiating. There will be a visitation one hour before the service at the church. Interment will be in the Cedar City Cemetery.