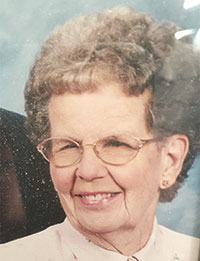 She was born May 10, 1922, in Austin, Minnesota, to Henry and Erma (Douglas) Weseman. Eugenia attended and graduated from Austin High School and went on to continue her education at Austin State Junior College.

She was a member of Grand Meadow Lutheran Church. She loved dogs, and enjoyed painting, playing cards, writing and building doll houses. She also had the pleasure of spending winters in Mission, Texas, for over 40 years.

She is survived by son, Mike Kahl; grandchildrenm, Jeffrey Kahl, Christopher Kahl, James Kahl, Patty Pladsen and Nicholas Kahl; and nine great-grandchildren. She was preceded in death by her husbands, Darrell Kahl and Victor Bush; a son, Peter; and a grandson, Patrick.

Private family services will be held at 10 a.m. on Monday, July 3, 2017, at Hindt Funeral Home in Grand Meadow. Officiating will be Pastor Beth Krolak.